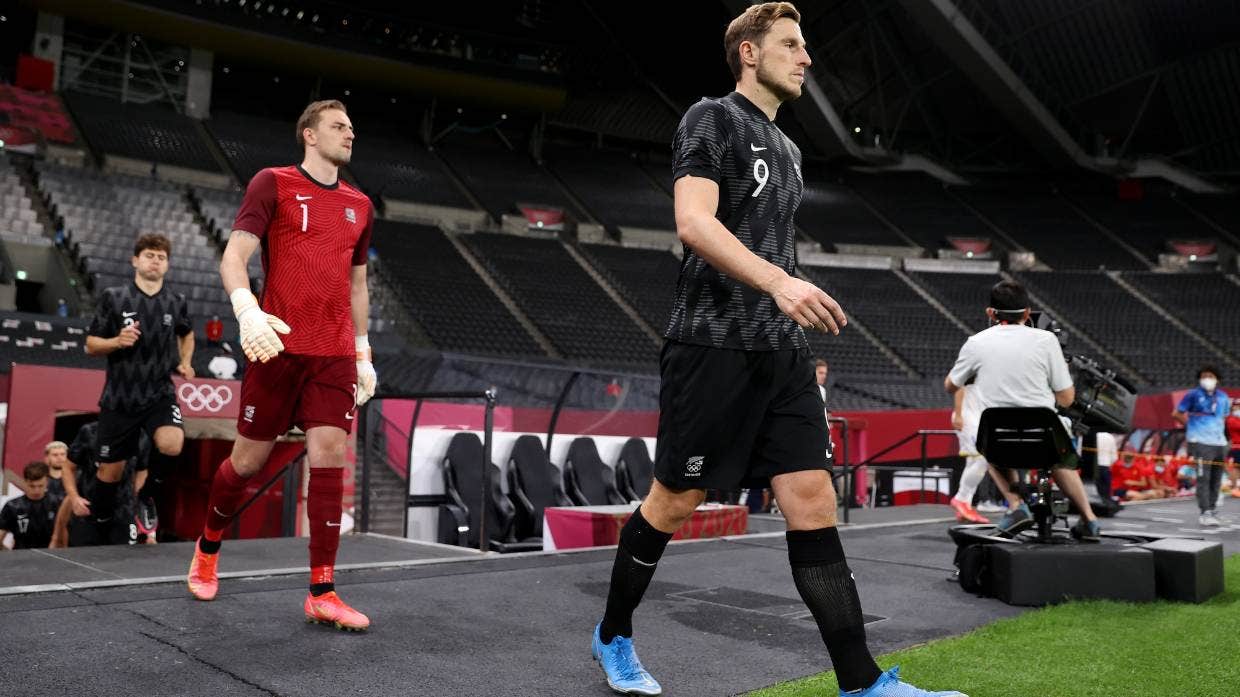 OlyWhites captain Chris Wood says it is “fantastic” the team has advanced to the quarterfinals at the Tokyo Olympics. Picture: STUFF SPORTS.

The OlyWhites have made it to the quarterfinals at the Tokyo Olympics and will face hosts Japan in Kashima on Saturday night for a place in the final four.

Coach Danny Hay feels they are “getting better with each match,” but they will likely have to be better still if they are to make history for a third time in the men’s football tournament, against a Japanese side that has won all three of its matches so far.

And while they twice let leads slip against Honduras before losing 3-2 in their second match, they turned in an assured performance in drawing 0-0 with Romania to finish second in group B, even though they would have no doubt preferred to win.

Their superior goal difference (0 to -3) put them into the quarterfinals ahead of Romania after both teams finished with four points – the first time a New Zealand men’s team has made it that far at an Olympics, after group stage exits in Beijing in 2008 and London in 2012.

Hay made four personnel changes as well as a change of system for Wednesday’s match under a closed roof at the Sapporo Dome and said afterwards: “We wanted to freshen things up”.

“We wanted to bring some players in that hadn’t been exposed to the tough conditions that we faced down in Kashima [where they played their first two matches, in temperatures around 30 deg c].

“The idea was to have some legs and in the Dome it’s a lot cooler, set at 19 degrees, so it allowed us to actually step on and press a lot higher.

“A lot of that was down for the conditions, and we just showed our ability to maintain possession a little bit better than we have over the last couple of games.”

The OlyWhites had 59 per cent of the ball against Romania, up from 44 per cent against Honduras, and 37 per cent against South Korea, and looked dangerous in the first half, before things got tighter in the second, where goalkeeper Michael Woud made a pair of saves to deny Romania, who might have only needed a goal to win and advance themselves.

Their best chances fell to All Whites and English Premier League veteran Chris Wood, who had a header at a corner saved and a free kick palmed away and also had the ball claimed from right in front of his forehead at another corner by Romanian goalkeeper, Marian Aioani.

“To get into the quarterfinals is fantastic,” Wood said.

“It’s a great achievement for us as a team and as a country, so we’re very pleased and proud of it.

“Playing with this team is something special and something different.

“No New Zealand team has played football the way these guys can and if they keep believing the way I know they can, they can play even better football.

“It’s a positive, and it’s a team full of potential.”

New Zealand’s only knockout wins at a major international football tournament came at the 2018 Under-17 Women’s World Cup, where the Kiwis beat Japan in a penalty shootout in the quarterfinals then beat Canada 3-1 in the third-place playoff.

All the men’s quarterfinals at the Olympics will take place on Saturday night, with Spain playing the Ivory Coast, Brazil taking on Egypt, and South Korea, who finished top of group B, facing Mexico in the other matches.