‘I’ll get her for defamation’: Court hears Jarryd Hayne’s call to teammate 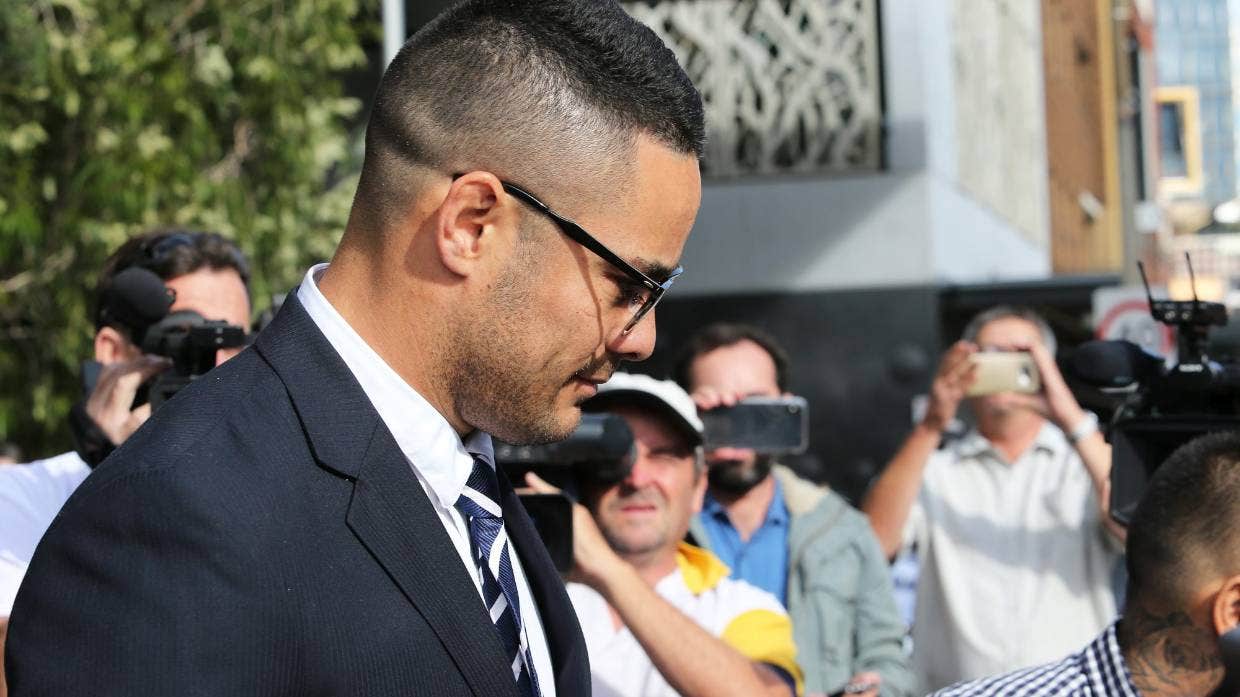 Former NRL star Jarryd Hayne said he was going to “get” his sexual assault accuser for defamation, in a phone call with his former State of Origin teammate Mitchell Pearce that was intercepted by police.

Mr Hayne, 32, is facing trial in Newcastle District Court on two charges of aggravated sexual intercourse without consent recklessly inflicting actual bodily harm, after he allegedly assaulted a 26-year-old woman with his hands and mouth in September 2018 and left her bleeding from the genitals. He has pleaded not guilty.

On Friday, the court was played a phone call Mr Hayne received on the evening of November 15, 2018 from Mr Pearce, a senior Newcastle Knights player. That evening, it had emerged that police were investigating Mr Hayne.

In the call at 7.03pm, Mr Pearce asked: “Who’s this sheila come out saying something about ya?”

“Full-blown weirdo, yeah,” Mr Hayne said. “A couple of your boys might know her, bro.”

Mr Pearce asked for her name and, when Mr Hayne gave it, Mr Pearce responded: “I’ll ask the boys.”

Mr Hayne said the woman “sent all these nude snaps on Snapchat and that, wanted to link up, link up”, but she became “filthy because the cab was out the front” of her house.

“It’s like, well I’m only going to be here for a short time,” Mr Hayne said. “I watched a bit of the grand final with her old girl.”

He said he was “fooling around” with the woman “and like she bled a little bit, it was weird”.

“She wigged out,” Mr Hayne said. “[I said] ‘My fingernail must’ve just clipped you, that’s all, it’s nothing major, like it was just a little bit.’ Full wigged out. ‘Nah nah, sweet sweet.’ So we watched a bit of f—in’ music videos and that, I was like oh OK yep, I better go now, rah rah rah. She’s just like, filthy I left her. I was like ‘what the f…’.”

He said the woman was now “trying to say I was aggressive and she said ‘no no no’. I’m like mate … what the f….”

Mr Pearce asked: “You got a lawyer and stuff?”

“Yeah I’ve got a lawyer and that,” Mr Hayne said. “I’ll get her for defamation easy … I gotta go, bro, my lawyer’s calling me.”

Mr Pearce asked when Mr Hayne would next be in Newcastle so they could catch up, and signed off with: “look after yourself, see you bro”.

The court heard Mr Hayne had received a missed call earlier that day from Karyn Murphy at the NRL integrity unit.

He had also spoken that morning to his accuser on Snapchat, where he told her: “Wtf are you on about!!! I stopped straught [sic] away and made sure your [sic] were ok … you’re starting to sound suss.”

Mr Hayne was arrested and charged four days later, after police contacted his lawyer and asked him to attend a police station.

Defence barrister Phillip Boulten, SC, said his client was initially meant to meet police at Gladesville, although this was changed at the last minute to Ryde where there was a waiting “media throng”. Mr Boulten said there is an ability to drive into an underground car park at Gladesville, but not at Ryde.

Detective Inspector Eugene Stek, who had oversight of the investigation, said on Friday the venue was changed because “Ryde is a charging police station, Gladesville isn’t”.

The detective said he was not the source of any information to the media about Mr Hayne’s case.

Dr Maria Nittis, who has examined about 1000 suspected sexual assault victims, told the trial on Friday that she examined the alleged victim about six weeks after the incident and looked at photos the woman had taken that night of injuries to her genitals.

Dr Nittis said she saw “two lacerations” in the photos, consistent with stretching of the genital tissue through penetration with “any blunt object” such as fingers, “or any other object including a bite”.

One of the lacerations was minor and one was more significant and “would have bled quite considerably”. Dr Nittis said she saw two irregularities in the tissue of the woman’s genitals during her examination, one of which could have been representative of scar tissue.

Under cross-examination, Dr Nittis agreed the injuries “could well have been caused by a finger or fingers used by the accused in an attempt to sexually stimulate” the alleged victim.