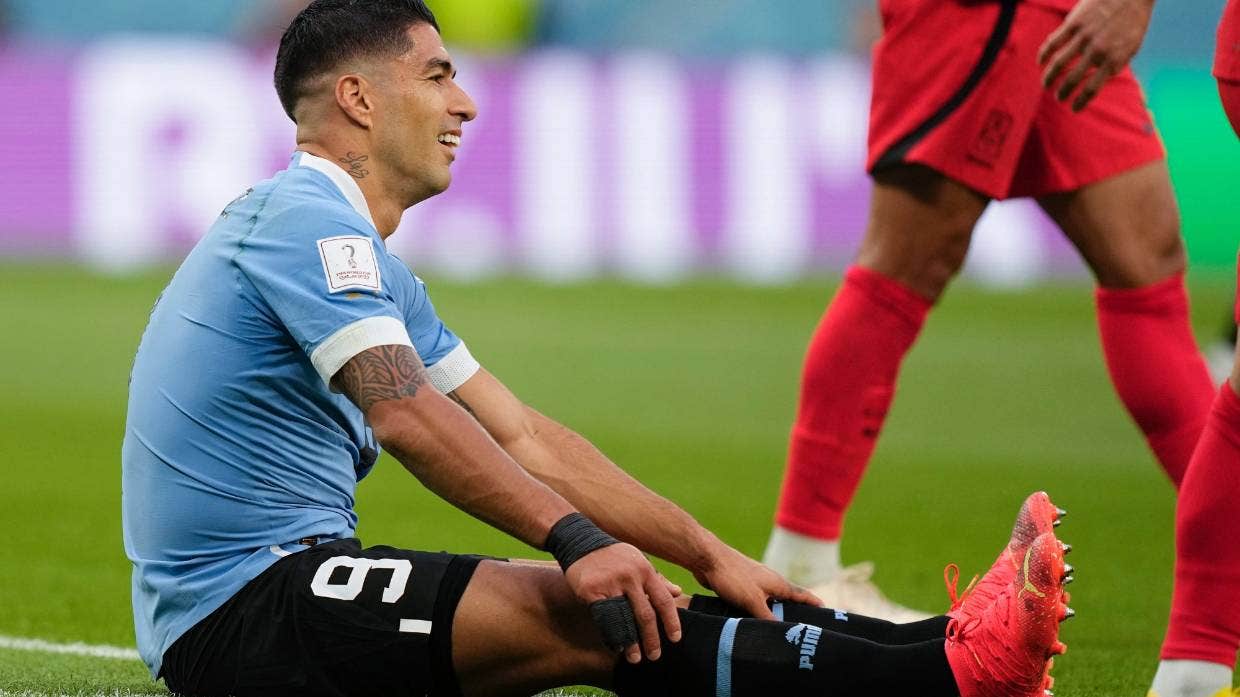 Luis Suarez is Uruguay's record goalscorer and at 35 is likely playing in his last World Cup. Picture: STUFF SPORTS.

Ghana and Uruguay meet at the World Cup on Friday (Saturday NZT) in a repeat of one of the tournament’s most contentious games, and Luis Suarez still isn’t apologising for his central role in the controversy 12 years ago.

Uruguay striker Suarez’s deliberate handball on the goal-line at the end of extra time in the quarterfinals of the 2010 World Cup in South Africa denied Ghana a certain goal and a place in history as the first African team to reach the semis.

Suarez was sent off for the handball but celebrated wildly on the sidelines when Asamoah Gyan hit the penalty off the crossbar. Uruguay won the ensuing penalty shootout.

“I don’t apologise because I take the handball and the red card but the Ghana player missed the penalty. It’s not my fault because I didn’t miss the penalty,” Suarez said.

Ghana can now go some way towards settling the score. By beating Uruguay in their final Group H match, Ghana would advance to the round of 16, while knocking Uruguay out of the tournament.

Though the match in Al Wakrah has been circled as one to watch ever since the World Cup draw was made, Ghana coach Otto Addo tried his best to cast it as a “normal game” despite 2010 remaining a raw and painful memory for many Ghanaians, who are demanding revenge for the handball.

“For me, it’s not a big topic,” Addo said, adding he wouldn’t criticise one of his own players if they did the same as Suarez.

“I would expect every player to do all he can to make sure his team goes through. Even sacrificing himself with a red card.”

“What happened in 2010 is very sad but we can’t change it. We want to look forward and we want to win this game,” he said. “No matter how.”

Ghana, who squeezed out a thrilling 3-2 win over South Korea in their last game, must win again in Al Wakrah to be certain of going past the group stage for the first time since 2010. A draw could also be enough depending on the result of South Korea against Portugal.

Captain Andre Ayew is the only Ghana player in Qatar who was on the 2010 squad.

Uruguay have a handful, including the 35-year-old Suarez, who is playing what’s likely his farewell World Cup before winding down a career that saw him celebrated as one of the best forwards in the world at one point.

He won the Copa America with Uruguay and Spanish league titles and a Champions League trophy with Barcelona.

Suarez also carved out a reputation as one of the game’s most controversial characters and has been punished three times for biting opponents, including a four-month ban for biting Italy defender Giorgio Chiellini on the shoulder at the 2014 World Cup in Brazil.

Suarez started Uruguay’s 0-0 draw with South Korea in Qatar but was on the bench for the 2-0 loss to Portugal, which left Uruguay bottom of the group.

Uruguay must now beat Ghana and hope South Korea doesn’t beat Portugal to extend their stay at the World Cup and Suarez’s international career for at least one more game. Goal difference will decide it if Uruguay and South Korea both win.

Stoking it just a little bit more, Suarez said the 2010 game against Ghana does still mean something to Uruguay.

“We are going to put our lives and soul into this match,” Suarez said. “Ghana is a good team but we know them, we have beaten them before and we know how to beat them again.”