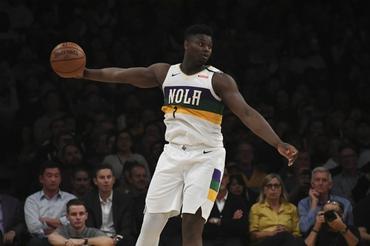 LOS ANGELES (Reuters) – New Orleans Pelicans rookie Zion Williamson has the kind of athleticism that is leaving NBA arenas gasping, even if he doesn’t take much notice.

“I really don’t pick it up, to be honest,” Williamson told Reuters, of the crowd reaction following his first game against the Los Angeles Lakers on Tuesday.

“I feel like (NBA atmosphere) is pretty similar (to college). Only difference is there’s no student section.”

In truth, the 19-year-old Williamson has been arguably basketball’s main attraction since he was a college student at Duke a year ago.

His eruptive dunks and movements captivated a nightly audience even then, including President Barack Obama who made a special visit to witness Williamson in person during a February 2019 college game.

But the Williamson hype reached its ceiling on Tuesday when he faced off for the first time against LeBron James, the last player to create such a wave of excitement in his rookie campaign.

While James enjoyed a better night, 40 points in a 118-109 Lakers’ win, Williamson did enhance his burgeoning reputation.

In the first quarter, he blew by James for a fast break dunk. There were many dunks and freakish moments by Williamson, each bemusing the Staples Center crowd.

Williamson put up 29 points but the impact of his performance scored higher as he created a rumble of anticipation each time he touched the ball in a way few players can.

“The kid’s special,” James said following his battle with the 6-foot-6, 280-pound leaper. “Very explosive, very quick at his size.

“He’s playing exceptional basketball. I think today’s game is a perfect fit for his game. The high pace. The way (the Pelicans) play, it fits his game, the speed they run up and down.”

Williamson appeared less surprised by the Lakers defense than he did the double and triple-team of media who were anxious to ask him about playing against James.

“It was a great experience, he is an incredible player and his resume speaks for itself,” Williamson said before having to repeat himself in assessing James as “incredible”.

“I don’t know what y’all aren’t understanding about that. He handled business, he did what he had to do to help his team get the win.”

However closely the NBA may want to link James and Williamson, both players said following the game that they have yet to have a conversation.

Williamson is just 13 games into his NBA career following a knee injury in the pre-season.

Averaging 23.3 points, seven rebounds and shooting 57 percent for a Pelicans (25-33) team trying to push for the playoffs, Williamson said he is only “78 percent” healthy thus far.

He is an unfinished product in more ways than one, often barreling through opponents like a prospect who has yet to harness his strength.