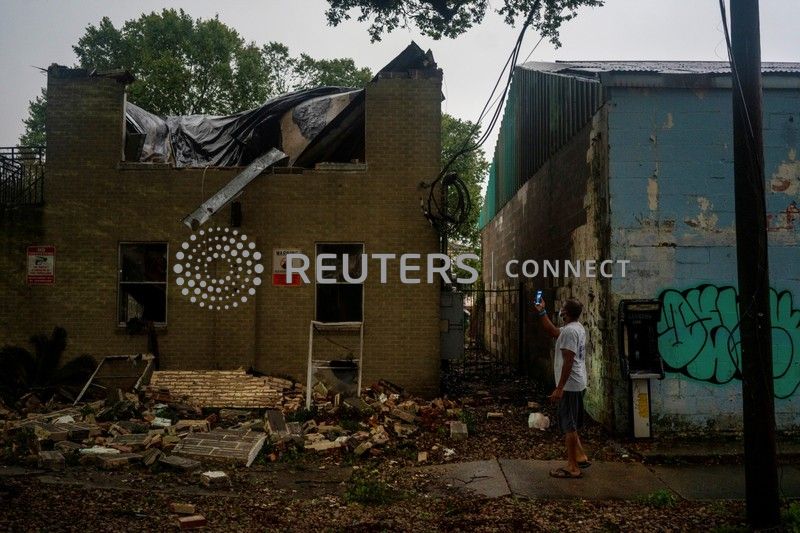 Joel Martinez, who until just recently lived in the lower apartment, makes a photo of Washington Garden's Apartments after it collapsed from the winds brought by Hurricane Zeta in New Orleans, Louisiana, U.S. October 28, 2020. REUTERS/Kathleen Flynn

(Reuters) – Hurricane Zeta smashed into Louisiana on Wednesday with 110-mile-per-hour (175 kph) winds and what government trackers called “a life-threatening storm surge,” the third hurricane to hit the U.S. Gulf Coast state this year.

Zeta’s extremely dangerous winds pummeled a stretch of the Gulf Coast from Louisiana to Mississippi. The category 2 storm tied a 15-year-old record for the most hurricane strikes on the state in a single year.

Zeta had raced across the Gulf of Mexico, intensifying to 20 miles per hour as it advanced over gulf waters. Its winds made it a strong Category 2 storm on the 5-step Saffir-Simpson scale, the U.S. National Hurricane Center said.

Its storm surge will reach up to 9 feet (2.7 meters) from Port Fourchon, Louisiana, to the mouth of the Pearl River, in Mississippi. The storm surge could spill over the levees guarding some of the state’s east.

Rains of 2 to 4 inches (5-10 cm) are expected from the Gulf Coast to the central Appalachians, the NHC said.

Oil and gas producers have evacuated 231 offshore production facilities and shut wells producing two-thirds of the offshore region’s oil production and 45% of its natural gas output.

A Louisiana landfall would make Zeta the fifth named storm to directly strike the state this year after Cristobal, Marco, Laura and Delta. Tropical Storm Beta went ashore over the border in Texas, bringing winds and flooding rains.