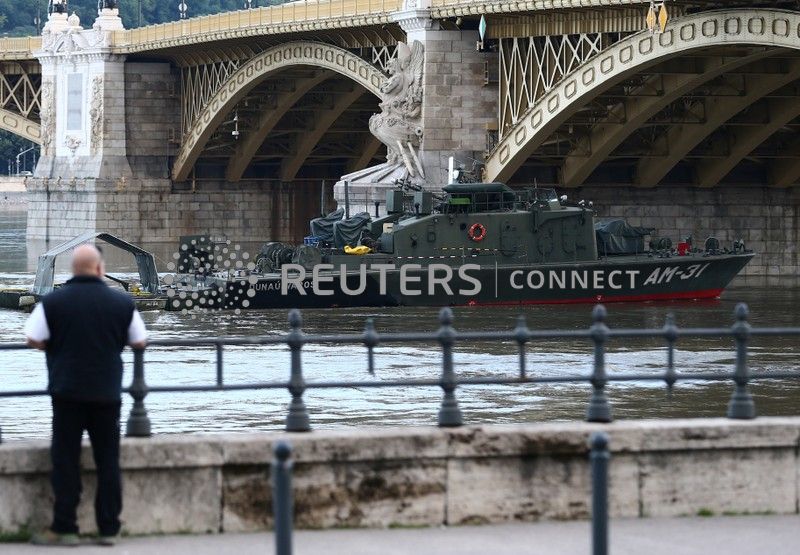 A man looks at a rescue vessel near the site of a boat accident, which killed several people, on the Danube river in Budapest, Hungary, May 31, 2019. REUTERS/Antonio Bronic

BUDAPEST (Reuters) – Hungarian Prime Minister Viktor Orban said on Friday he had asked for a thorough investigation into a boat accident on the Danube River in Budapest that killed at least seven South Korean tourists this week.

Hungarian police said late on Thursday they had taken into custody the captain of a 440-foot (135-metre) cruise ship, which hit and sank a smaller pleasure boat where a Korean tourist group was sightseeing. It was so far unclear what caused the accident.

Rescue teams have taken up positions on the surface above the sunken tourist boat and divers have attempted to approach the wreckage, but the flooding river meant conditions were poor and the work could take a long time, the government said.

“One is shaken by this … an accident happened where passengers had almost no chance for survival,” Orban told state radio, offering condolences to relatives of the victims.

“I have asked the authorities to carry out a strict and thorough investigation,” he said.

South Korean Foreign Minister Kang Kyung-wha arrived in Budapest on Friday to get first-hand information on the rescue efforts and help the process. She thanked her Hungarian counterpart for the intense search and rescue operations.

“I hope this level of effort can be sustained,” she told a press conference. “We strive to ensure no corpses are lost from the wreckage or the riverbed, and expanded the search parameters to that end.”

In addition to those killed, 21 people are officially listed as missing, but officials had little hope they would be found alive more than 36 hours after the accident.

The search area extended to Serbia, downstream from Hungary, because the river could have carried bodies that far by now, Hungarian Foreign Minster Peter Szijjarto said.

“Conditions are completely against us,” he said. “It is impossible to get close to the wreckage. Visibility is zero, the Danube flows at 15 km per hour (9.3 miles per hour). The wreckage is six metres (20 feet) underwater.”

The boat was cruising during a rainstorm on Wednesday evening when the accident occurred and sank with 33 South Korean tourists and tour guides and two Hungarian crew aboard.

A crane ship was docked near the wreck in preparation for recovery operations.

“The task is almost impossible,” an industrial diver helping the recovery team told Reuters. “The water is high, with strong currents and reduced visibility. Right now the team is trying to find a way to submerge again.”