Hungary protests spark opposition coalition – but will it last? 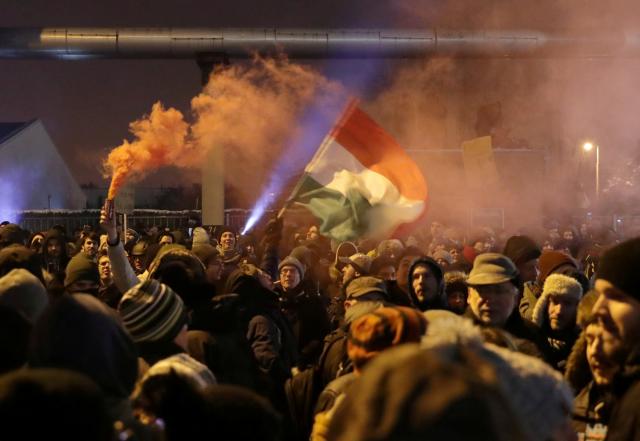 FILE PHOTO: People attend a protest against a proposed new labor law, billed as the "slave law", outside the headquarters of the Hungarian state television in Budapest, Hungary, December 17, 2018. REUTERS/Marko Djurica

BUDAPEST (Reuters) – Week-long protests in Budapest have forged fragmented opposition parties into a rare coalition against Viktor Orban, drawing young Hungarians into the streets to demonstrate against what they see as his increasingly authoritarian rule.

Passage of two laws last week backed by the prime minister’s Fidesz party angered a variety of domestic voter groups, galvanizing the weak and divided opposition to act with a unity rarely seen in his eight years in power.

The protests in Budapest raised the question of whether such fledgling cooperation can last long enough to put down roots and offer viable opposition to a charismatic politician normally adept at side-lining dissent.

While no substantial shift in Hungary’s domestic balance of power appears on the cards for now, there is a sense among some Hungarians that Orban overplayed his hand by pushing through the two laws that drew such a concerted opposition response.

One law, dubbed the “slave law”, allows employers to ask staff to work up to 400 hours per year of overtime.

Another would set up new courts controlled by the justice minister, which critics say could lead to political meddling.

Denes Hubicsak, an engineer, 24, joined almost all the protests since Dec. 12 and came to the state television building on Monday night, ignoring freezing cold, to demand independent public media and courts.

“I’m here because I want to live here in 10 years’ time as well,” he said. “Many people here are protesting because of the slave law now, but they sometimes forget the other one: the law about administrative courts.”

Hubicsak said he did not have high hopes of the EU reining in what critics see as the increasingly authoritarian policies of Orban, as this has not happened in the past eight years.

“I cannot see the pressure from the EU or from the European People’s party that could influence them a little, or make Orban or Fidesz just think twice,” he said.

The demonstrations, which peaked at around 10,000 on Sunday, pose no immediate threat to Orban as Fidesz enjoys strong voter support, ever since his third straight election win in April.

But if the protests persist and leftist parties and the nationalist Jobbik party can turn the latest cooperation into a lasting campaign, such concerted activism might erode Fidesz’ widely expected win at European Parliament and municipal elections next year, some analysts said.

There were many students among the protesters on Sunday, and some also joined on Monday night. This is the so-called Generation Y — Hungarians in their 20s and 30s — for whom Orban and his policies are not an appealing choice.

They are very unhappy about the government’s education policies which they say fail to prepare them for life in the 21st century by too rigidly focusing on rote-learning.

“What they do in higher education is really bad,” said Dora, 16, who did not want to give her full name. “I am worried I won’t have a good college to go to in Hungary and I don’t want to go abroad …I also oppose the labor law.”

Orban has clashed with Brussels over his policies to curb the media and courts, has tweaked the election system to favor Fidesz and put loyalists at the head of several institutions.

Orban has projected himself as defending Hungary’s Christian culture against Muslim migration into Europe, an image which resonates with millions of voters, especially in rural areas.

Fidesz had 38 percent support in a November poll by pro-government think-tank Nezopont, while all the opposition parties had about 25 percent combined.

Csaba Toth, director of liberal think tank Republikon, said the opposition was now working in rare unity and could build on this next year when Hungary holds European and municipal polls.

“But if they are not able to come up with something forward-looking in the next few days before Christmas, the whole (protest sentiment) could collapse,” he said.

A government spokesman dismissed the protests as a desperate attempt by a weak opposition and foreign-paid activists.

“Citizens have the right to protest as long as they don’t break the law. But beware when a small minority of foreign-trained activists, representatives of losing political parties and, yes, Soros network putschists emerge hell-bent on toppling a popular, democratically elected government,” Zoltan Kovacs wrote in a blog on Monday.

A spokesperson for George Soros’ Open Society Foundations said on Monday that Soros had not stoked the protests.