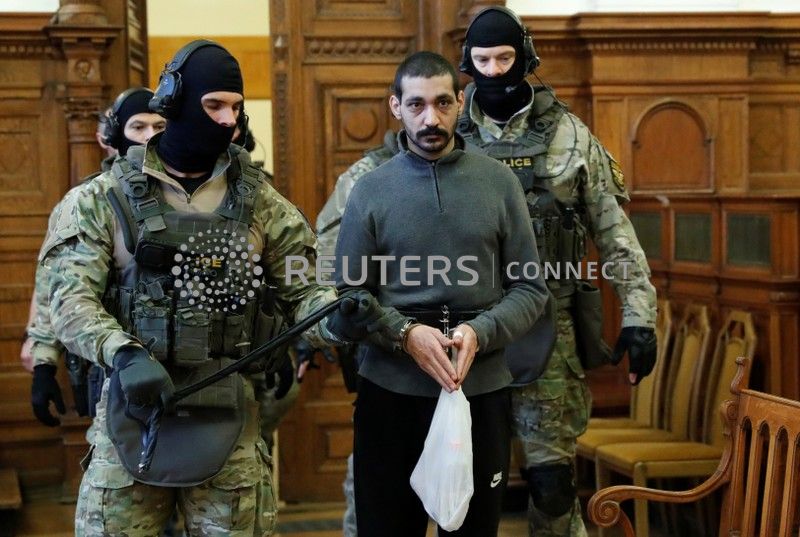 F. Hassan, a 27-year-old Syrian charged with terrorism and crimes against humanity as a member of Islamic State, is escorted by the members of the Hungarian counter-terrorism unit TEK for a court hearing as his trial gets under way in Budapest, Hungary November 13, 2019. REUTERS/Bernadett Szabo

BUDAPEST (Reuters) – A Hungarian court on Wednesday began the trial of a Syrian man accused of terrorism and crimes against humanity as a military leader of Islamic State near the city of Homs in 2015, saying he participated in the murders of dozens of people.

The 27 year-old, identified as F. Hassan, was charged in September after an international investigation led to his capture in Budapest’s main airport at the end of last year.

He denies the charges and said he was in Turkey, not Syria, at the time the atrocities took place.

Prosecutor Andras Urbanyi told the court F. Hassan deserted from the Syrian army in 2011, then joined Islamic State sometime before 2014. He became commander of an IS unit and actively recruited members.

“In May 2015 Hassan’s unit was ordered to capture an area rich in artefacts near Homs,” Urbanyi said. “Hassan was to draw up a death list, naming those to be executed out of revenge or to intimidate locals. The list was approved by IS leaders.”

His brigade went door to door, pulling and murdering individuals on the list either with gunshots or knifing, Urbanyi said. Others were forced to gather at the town’s main square.

“At the square they were forced to witness an execution. The local imam was beheaded. Hassan and an accomplice severed the imam’s head with long, seesawing motions, then held up his head to the crowd.”

Hassan, cuffed on his hands and feet and accompanied by a dozen heavily armed counter-terrorism agents, gave a detailed testimony of his upbringing, family and his subsequent migration to Europe, and denied involvement in the crimes.

“Your honour, I committed nothing, I just want my family,” he told judge Gergely Miko. “I was not even in Syria in 2015. I was in Turkey, never to return to Syria.”

His attorney, Janos Kelen, also said Hassan was not in Syria at the time of the incidents. He was illiterate and incapable of leading units and organise killings, he added. Kelen disputed that a video of the execution, shown in court, featured Hassan.

Witnesses did not personally see the atrocities, he said, while a lie detector test was conducted illegally, without a defence attorney.