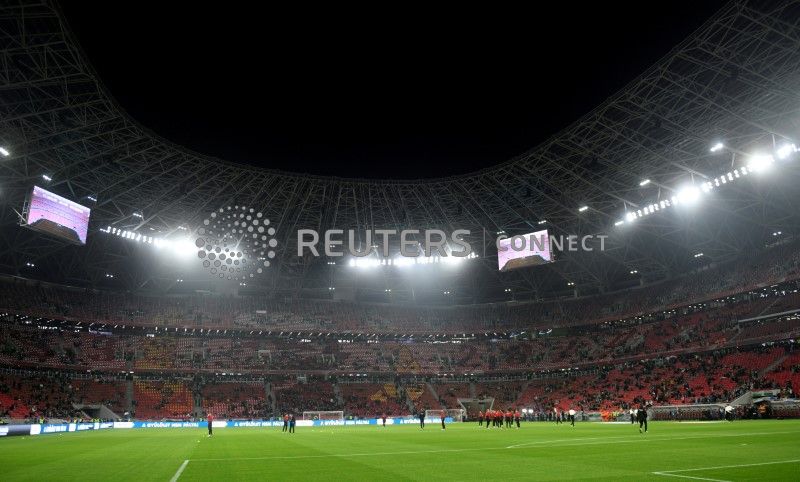 BUDAPEST (Reuters) – Hungary’s Football Federation is selling more tickets for the Hungarian Cup final between Budapest Honved FC and rural side Mezokovesd due of high demand to attend one of the first big games to be played with fans since the COVID-19 pandemic.

Football’s cup and championship contests would normally be reaching a climax at this time of the year, but play was suspended to help stem the spread of the novel coronavirus pandemic.

Fans have been hungry for live action, and tickets for the lower tier of the newly built 65,000-seat Puskas national arena sold out so quickly that additional seating sections have been included.

Tickets for the match on Wednesday are on sale online and go for as little as 1,500 forints ($5), while VIP seats sell for 40 times that.

The federation is encouraging social distancing, although it has not gone as far as to bar older fans, whom some clubs in Hungary have turned away from games. Football matches restarted in Hungary in late May, with fans attending.

The central European country escaped the worst of the pandemic largely by imposing an early and strict curfew, which began to be eased in early May.

At Wednesday’s game, only one in four seats will be occupied, with no fans sitting behind one another either, promising a strange atmosphere at the state-of-the-art arena, which was scheduled to be a venue for the UEFA Euro 2020 championship, now postponed until next year. [nL8N2824WM]

Laszlo Toth, a director of Mezokovesd, told the local sports web site NSO that about 9-10,000 fans would be able to see the game in person.