Hundreds of thousands without power in Ottawa after tornado hits 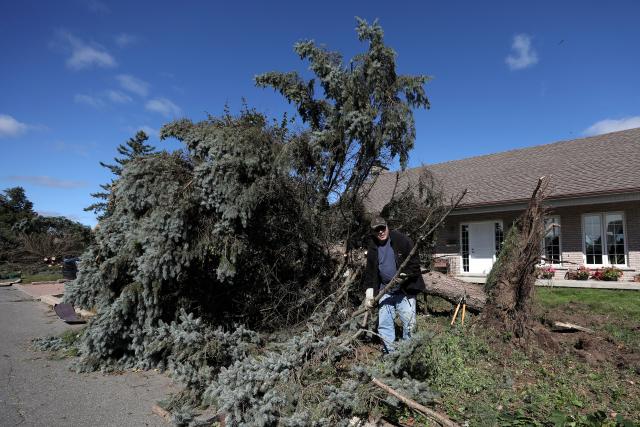 A man removes branches from a damaged tree after a tornado hit the Mont-Bleu neighbourhood in Gatineau, Quebec, Canada, September 22, 2018. REUTERS/Chris Wattie

OTTAWA (Reuters) – Hundreds of thousands of people were stranded without power in and around the Canadian capital Ottawa on Saturday after a tornado touched down twice, destroying some houses and ripping the roofs off others.

At the same time high winds also battered the region and Ottawa Mayor Jim Watson said it could be days before electricity was fully restored. At least six people were injured.

“It’s in the top two or three traumatic events that have affected our city,” Watson told reporters. “It looks like something from a movie scene or a war scene.”

The tornado hit on Friday evening, demolishing homes in the town of Dunrobin to the north west of the city before crossing over to the town of Gatineau, which lies directly to the north of Ottawa in the province of Quebec.

High winds damaged part of Ottawa’s major electrical substations and officials said around 200,000 people on both sides of the river were without power. Ottawa and Gatineau together have a population of around 1.3 million people.

“We have lost absolutely everything. I have got a beer fridge that’s sitting in my garage – that is the only thing that is untouched – but everything else has gone,” Ottawa resident Todd Nicholson told the Canadian Broadcasting Corp. He was not home when the tornado struck.

Quebec Premier Philippe Couillard broke off campaigning ahead of an Oct 1 provincial election to travel to Gatineau.