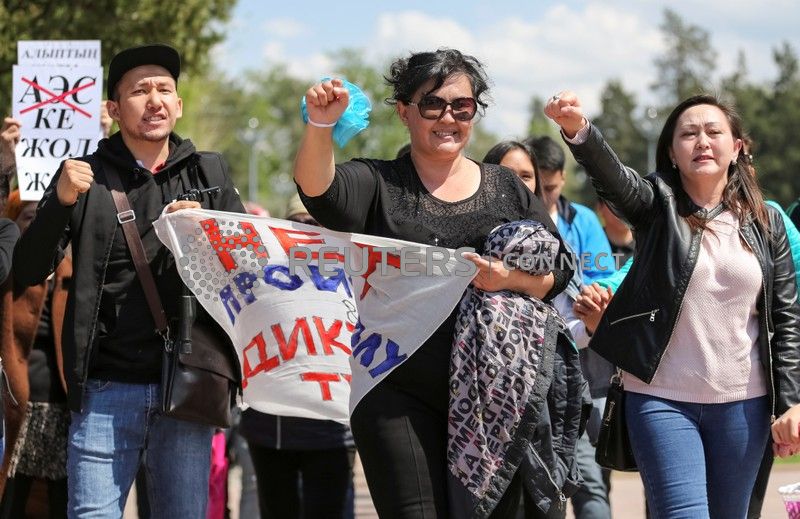 Anti-government protester shouts during a rally calling for a boycott of June presidential elections in Almaty, Kazakhstan May 1, 2019. REUTERS/Pavel Mikheyev

ALMATY/NUR-SULTAN (Reuters) – Hundreds of Kazakhs rallied in their two main cities on Wednesday, calling for a boycott of June presidential elections that they dismissed as a cover for an orchestrated handover of power.

Crowds gathered in the main amusement park in the commercial hub Almaty and a square in the capital Nur-Sultan in protests called by one of the main rivals of veteran leader Nursultan Nazarbayev.

In Almaty, protesters chanted “I have a choice” and “Old man, go away” and waved banners reading “No to despotism and dictatorship”, as families on a day out looked on and techno music blared.

Police, who have broken up smaller anti-government protests in the past, only detained a handful of people who tried to take the demonstration outside Almaty’s Central Park, and a few stragglers left after the rally ended in the capital.

Nazarbayev abruptly resigned in March after almost three decades in power and endorsed ally and former Senate speaker Kassym-Jomart Tokayev, all but guaranteeing his success.

The political transition in the central Asian state neighbouring Russia and China is closely watched by foreign investors who have pumped tens of billions of dollars into its energy and mining sectors since independence.

The rallies were organised by supporters of Mukhtar Ablyazov, a former banker and government minister who lives in France. Ablyazov is wanted in Kazakhstan on charges ranging from fraud to murder – which he denies – but a French court has ruled against his extradition.

Nazarbayev retains sweeping powers in the former Soviet republic of 18 million and has so far remained actively involved in running the government.

Parliament voted unanimously to rename the capital, formally knows as Astana, in his honour after his resignation. His eldest daughter, Dariga Nazarbayeva, succeeded Tokayev as Senate speaker.

The 78-year-old leader has acknowledged planning his succession, and said he is using legal powers to choose the most worthy candidate.

Tokayev, who last month called a snap election for June 9, attended Day of Unity celebrations in Almaty on Wednesday, but did not mention the protests in his speech.