Young and old from the Serua/Namosi province came out in numbers to attend the one-day Care Givers and Carers for Stroke Persons workshop held at the Namosi House in Navua on Friday, August 5, 2022. Picture: RAMA

Hundreds of people thronged Namosi Provincial Hall in Navua yesterday in the hope of securing caregiving certificates that could secure them a job abroad.

Youths, nursing mothers, elderly men and women packed the inside and outside of the premises when a team from this newspaper arrived at the site.

A big chunk of the crowd left after finding out the event was for a stroke caregiving workshop facilitated by the Ministry of Health and Medical Services in partnership with Counterstroke Fiji.

Vice president of Counterstroke Fiji Lusiana Aca said the workshop was part of a stroke awareness program and to shed light on the importance of caregiving and caregivers.

She said they did not expect a large number to show up.

“I think the main attraction is the certificates,” she said.

“From all the other workshops we’ve done in the different places, this one takes the cake.

“We brought around 500 certificates today so those that will not be receiving theirs can pick it up from the office next week.”

She said the certificates were basically rewards for the public’s participation in the workshop, especially those who were taking care of stroke patients.

“A doctor, dietician and physiotherapist from the CWM Acute Stroke Team Care came to facilitate as well.”

Many of those present shied away from talking to the media on the record but one participant, Manoa Tamanikaira, said he had registered for the caregiver workshop on Thursday. 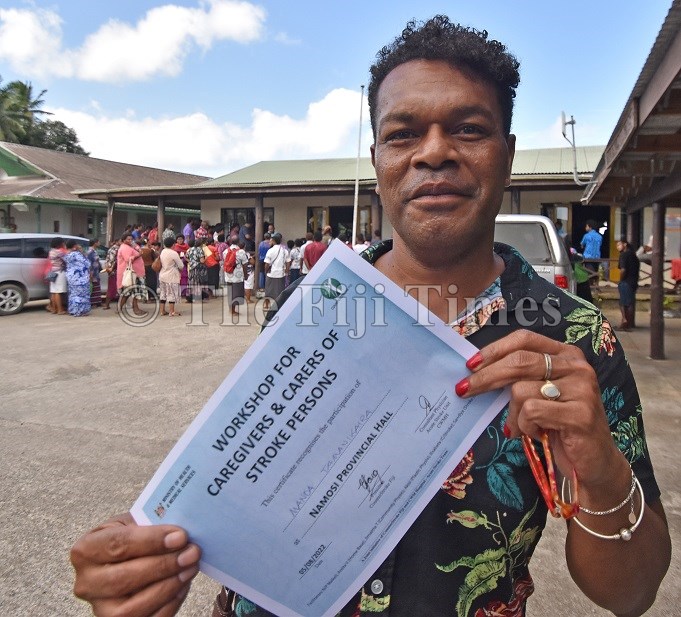 “Caregivers are a great demand overseas,” he said.

“Participating in this workshop is one step closer to being able to get a job as a caregiver.”