How the Tuvaluans settled on Kioa 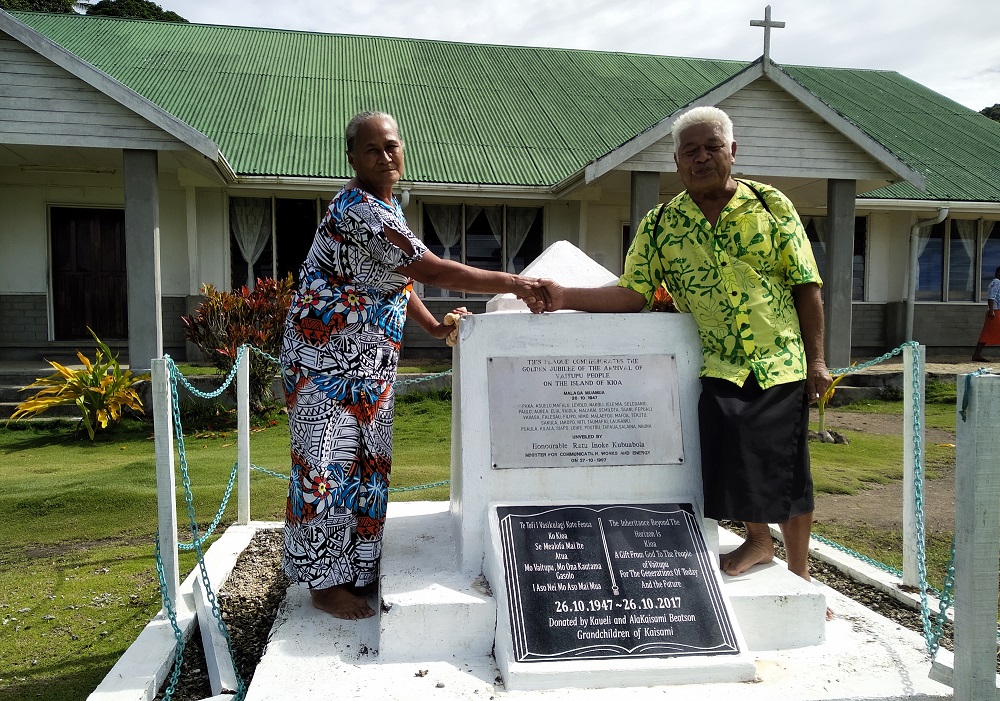 Mr Fiafia and his wife Nina at a monument on the island commemorating the pioneers who brought the island. Picture: LUKE RAWALAI

LYING majestically at the entrance of Buca Bay in northern Fiji, one can easily make the mistake of thinking that the island of Kioa was part of Vanua Levu.

Spanning across the entrance of the bay, its close proximity to the mainland gives the illusion that the island is part of the mainland.

However, Kioa is an island on its own, settled by the people of Tuvalu who bought it as they searched for greener pastures in Fiji back in the days.

With white sandy beaches bordering the island, the place itself is a picture of tropical bliss.

According to Tavita Taulia, author of the book Kioa Island History, the island was bought in 1946 by the people of Vaitupu, an island in the nation of Tuvalu, with money earned from American Armed Forces during WWII and settled on October 26, 1947.

They were the 37 original settlers.

The Tuvaluans brought with them their culture, religion, and lifestyle — which have been preserved and are still intact today.

The lifestyle of this group of people is overseen by the island’s council.

History records that in the year 1947, at 2pm on a Sunday afternoon in October, a ship by the maiden name, Avahou, anchored on the beautiful sheltered waters of Salia Bay.

It had sailed all the way from Vaitupu, carrying expectant passengers who were looking forward to start a new life on the island.

A great silence befell all those on board as the tired and weary Polynesian islanders scrambled into life boats to complete the last leg of the journey.

As they set foot on solid ground, there was no one to welcome them.

Only the strange sounds uttered by birds on this uninhabited island were the only greetings offered to these lone travellers.

As the ship heaved its anchor and sailed away, the settlers who had sailed about 10,000 kilometres to get to their new home finally realised they were now left alone in a foreign country far away from their homeland.

The constant memories of their home country were the only realities that linked them to the past.

What awaited them were difficulties encountered in the early years of relocation — and yet a hope for a better future.

Born in 1952 on the island, Lotomau Fiafia said his ancestors had come a long way, and had accepted that Kioa was now their eternal home.

He said they were proud to be counted as Fijians.

Mr Fiafia said to this day they still celebrated and recognised the efforts and insight of their forefathers who chose to abandon their home of Vaitupu, the largest of the eight Islands that made up the nation of Tuvalu (formerly known as the Ellice Islands).

“Our elders heard that three islands in Fiji were on sale and this were the islands of Rabi, Wakaya and Kioa,” he said.

“In 1946 after collecting the money to purchase the island they would later call home, the council of elders chose the island of Kioa.

“In 1947 they left their island home on search for better opportunities and future for their future generations, including us who are reaping the benefits of this daring choice.

“To this day we have not regretted that decision our elders made because our children now have access to better education and our people have an opportunity to make a living for their families.

“In the later 1980s, the people of Kioa were recognised and accepted by the Tui Cakau, the sovereign high chief of Cakaudrove, Ratu Tuikilakila Golea, who made us as part of his own clan.”

During the reign of Ratu Glenville Lalabalavu he enforced this decision reassuring the people of the island that we were part of his clan of Valelevu. “For this recognition we are grateful as a people and we are proud to be A’i Ca’audrove.

“Staying in Fiji after all these years has not made us forget our beginnings as we still maintain contact with our people back in
Tuvalu, especially those on the island of Vaitupu because we are still very much a part of them and they us.

“This is evident in the Tuvaluans government delegation that attended our anniversarial celebrations in 2017 on the island
commemorating our elders arrival to the island.”

Mr Fiafi a was the former chairman of the island’s council and is married to Nina Rina Fiafia with whom he has eight children and 17 grandchildren.