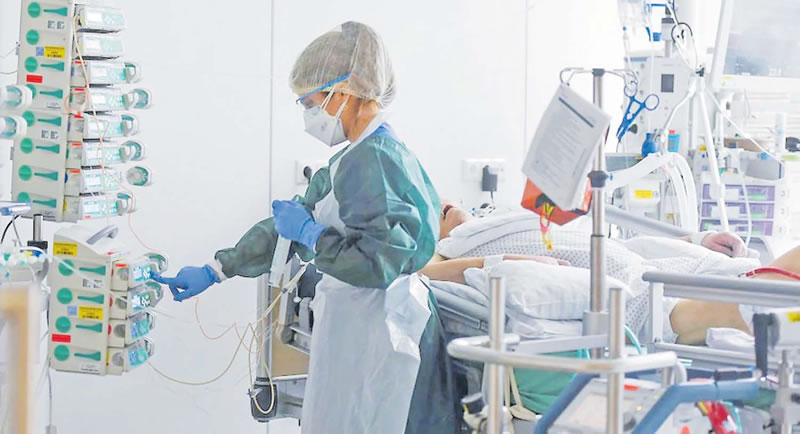 Experts believe older people and people with compromised immune systems are more at risk of severe illness or death from COVID-19. Picture: ABC

As Australia’s vaccine rollout eases — slowly — into its second phase, experts are pausing to reflect on how far we’ve come with COVID-19 treatments and what the prospects are for saving more lives.

“From a global view, we started off really with a mad dash to look for anything that we could re-purpose,” said Dr Rayner, who is the president of integrated drug development at the company Certara.

“There was a tremendous amount of hand waving, waste and pseudoscience.” Steven Tong is an infectious disease expert with Australia’s Doherty Institute and one of the principal investigators in a trial gathering evidence on COVID-19 treatments.

He said experts had learnt a lot since Australia’s first case of the virus was confirmed back in January 2020. “For patients that do end up in hospital now, we’re better at treating COVID now than we were a year ago,” Dr Tong said.

“There’s been a lot of evidence that has been developed over that time.” But experts agree more research is needed to improve treatments and save more lives.

Before delving into how treatments ease symptoms of COVID-19, it’s important to understand how SARS-CoV-2 can make people sick.

COVID-19 risk factors First, the virus enters the body via the throat or nose and starts invading cells and making copies of itself.

During this phase, someone might not show symptoms, but they are likely to shed the virus and can spread it to others. Next, the virus moves to the lungs, where it starts causing tissue damage.

The body’s immune response to this can cause the lungs to become inflamed, making it hard to breathe. Most deaths due to COVID-19 are due to respiratory failure.

In severe disease, the virus can also damage other organs including the liver, heart, or kidneys. People who have compromised immune systems or complex conditions, such as chronic kidney disease, have an increased risk of severe illness from the virus that causes COVID-19.

Dr Tong says the older someone is, the more likely they are to die from it. “If you’re comparing a very young child to a very elderly person, say someone who is under five with someone who is older than 90, there’s greater than a 1,000 fold increased risk of death,” he explained.

The treatments people are given depends on both what stage their illness is at, and how severe it is. Dr Tong said there were two main stages of the illness; the first where the virus is replicating in high levels, and the second where the body starts mounting an “overexuberant” inflammatory response to fight the virus.

“In the early stage, the goal is to dampen down replication,” he said. In the second stage, Dr Rayner said doctors aimed to “dampen down” the immune response, in a bid to reduce inflammation.

“When people get really sick and you have this inflammation going on, it sets up this whole chain of events in your body when your body starts to attack itself, drops its blood pressure etc,” he said.

It’s important to note that the two stages overlap, meaning it’s not a clean switch from one to the other and doctors often treat both simultaneously.

Both may be used for patients requiring oxygen to support their breathing. Dexamethasone acts to reduce inflammation in the lungs, which starts occurring in the second week of illness.

In a randomised clinical trial, remdesivir has been shown to reduce the time to clinical recovery from 15 days to 11 days. Patients might also be given a drug called tocilizumab, a rheumatoid arthritis drug that early data suggests can improve outcomes for severely ill patients.

Dr Tong said tocilizumab acted as an anti- inflammatory by inhibiting a molecule called Interleukin-6 (IL-6), one of the body’s chemicals that plays an active role in inflammation.

In randomised clinical trials, tocilizumab has been shown to reduce the risk of dying for patients with severe disease and high levels of inflammation.

Dr Rayner said while steroids (such as dexamethasone) “threw a blanket over everything”, IL-6 inhibition used a “more discrete”, targeted pathway to bring down inflammation.

Treatments for mild disease Dr Tong said, in general, Australian doctors do not prescribe anything to treat mild disease.

In the US, designer monoclonal antibodies are available to treat people who present within days of their symptoms starting. These have shown to reduce the risk of needing hospitalisation.

Dr Rayner said these “very specific antibodies” had been developed to fight SARSCoV- 2 and its spike protein and effectively “damped the cause” of COVID-19, rather than its symptoms.

He said some of these monoclonals were “great but expensive”, but as more technology became available, the price would drop. “One of the biggest areas of focus is trying to come up with treatments that are applicable earlier in disease,” Dr Rayner said.

Professor Carl Kirkpatrick, from Monash University’s faculty of pharmacy and pharmaceutical sciences, said one challenge was that COVID-19 had a long incubation period.

“This virus is not like fl u — you don’t get infected and then two days later start showing symptoms,” Prof Kirpatrick said. “It’s got quite a long time between infection and showing symptoms.

“By the time you’ve shown symptoms, it’s really hard to shut down (the disease). “From that point in time, all you can really do is throw in those monoclonals that then try to bind as many viruses as possible and lower that burden down.”

Designer monoclonal antibodies are not currently available as a treatment option in Australia. Australia’s high case fatality While Australia has a substantially lower number of COVID-19 cases than most countries in the world, fatality in our diagnosed cases is much generally higher than elsewhere.

To date, Australia has recorded fewer than 30,000 confirmed cases of COVID-19 and 909 deaths, putting case fatality at about 3 per cent.

The US, by comparison, has recorded 29.5 million confirmed cases and 537,200 deaths, meaning its case fatality is about 1.8 per cent. Dr Tong said the main reason for Australia’s comparatively higher case fatality was because during Australia’s second wave, the virus hit nursing homes “really hard”.

There, COVID-19 quickly spread within a frail population, already unwell with other conditions, and who were most vulnerable to dying from the disease.

This also happened very early on in the pandemic, when experts were still learning about the disease and how best to treat it.

Prof Kirkpatrick said if influenza infiltrated nursing homes at the same rate, there could likely be a similar number of deaths recorded.

“It’s an unfortunate combination of time and place, and that we didn’t realise how fast it was progressing into those environments.”

It is worth noting that those who become severely ill with COVID-19 in Australia have recovered at an incredible rate throughout the pandemic.

At 22 per cent, Australia’s ICU mortality is one of the lowest in the world. Regulations ‘different’ in Australia Dr Tong said it was also important to remember the COVID-19 situation in Australia was “very different” compared with other countries, and our health system had not been overwhelmed like hospitals in Europe and the US.

And from a regulatory perspective, Australia has always been very cautious about which drugs it prescribes patients.

By comparison, Dr Tong said early on in the pandemic, both the US and Europe were using treatments which there was “no evidence for or against”, such as hydroxychloroquine.

“Our guidelines have always held the line that we shouldn’t use such drugs outside of the clinical trials.” Dr Rayner, who is also an adjunct associate professor at Monash University, said the US approach contributed “a lot of risk” that could have been avoided.

Where to from here? Experts agree there won’t be a “silver bullet” to deal with COVID-19. “You can’t ever put all your eggs in one basket,” Dr Rayner said.

One part of the solution is vaccination, which is needed to reduce transmission of the disease in the first place. “To vaccinate the whole planet is a lot of work, and I think until that happens, COVID is going to continue to circulate,” Dr Rayner said.

It’s also important to remember people who have been vaccinated can still contract the virus – although both the AstraZeneca and Pfizer vaccines approved for use in Australia have been shown to be effective at preventing severe disease and death.

“The vaccines are a seatbelt, they don’t stop you necessarily from getting it. It’s really the herd immunity that will get that,” Dr Rayner said.

When it comes to treatments, Dr Rayner and Prof Kirkpatrick say using a combination of treatments will be the way forward. But Dr Tong is keen to offer a reality check.

He said while further research would help develop more effective treatments, it’s unlikely all the lives of those who got sick would be saved. “I don’t think we will ever get to that point,” he said.