‘How can she have HIV?’: Pakistan town struggles with surge in infections 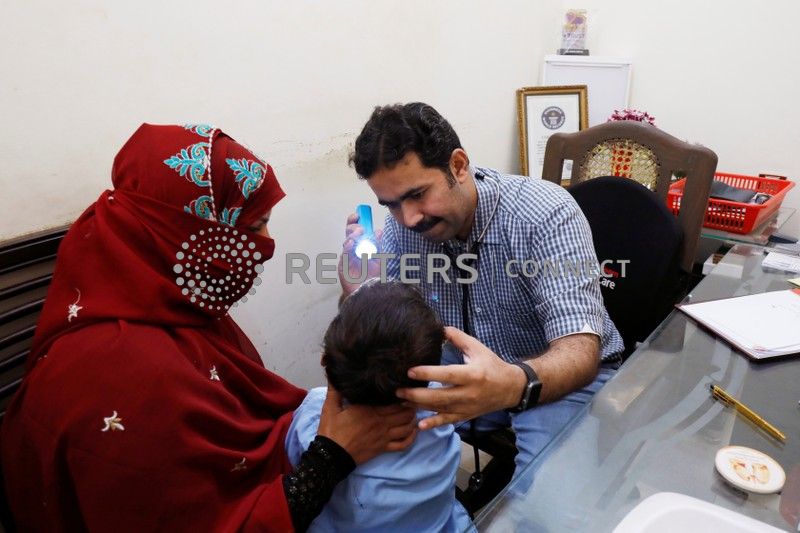 RATODERO, Pakistan (Reuters) – Doctors in a town in Pakistan are struggling to cope with a surge in patients infected with HIV, the virus that causes AIDS, with nearly 700 cases since April, most of them children.

“For me it was impossible to imagine,” said Nazeer, recalling the day a doctor said his 16 month-old girl had tested positive for HIV.

“I told him ‘are you joking with me, how can she have HIV?’,” he said in his home in Ratodero, 480 km (298 miles) from Karachi, the capital of the southern province of Sindh.

His daughter is receiving treatment, he said, adding he did not know how she was infected.

Health officials say 681 people have tested positive for HIV in Ratodero, of whom 537 are children, since April 25.

More than 21,00 people have taken an HIV test at Ratodero’s only screening centre in a government hospital. Others have been tested at private clinics.

“I have identified the tip of the iceberg. This could be in the thousands, not hundreds,” said Dr Imran Akbar Arbani, who operates a clinic in the town in Lakarna district.

About 60% of Ratodero patients were infected by reused needles and syringes, or through transfusions of blood that were not screened properly for HIV, said Dr Sikander Memon, head of the AIDS control programme in the province.

Police and doctors conducted an initial investigation and found that 123 HIV patients had been treated by one doctor before they were infected.

Dr Muzaffar Ghanghro was arrested on April 30 and has been charged with unintentional murder, police said.

“Negligence and carelessness of Dr Muzaffar Ghanghro has been the prime reason behind the spread of HIV at the later stage,” the investigation team said in a report.

Reuters was not permitted to contact Ghangro in jail and was not able to contact his lawyer.

Imtiaz, a labourer, said he had taken his three children to Ghangro because there was no pediatrician in town. All three became infected with HIV.

“He applied the same drip on 50 children without changing the needle,” he said.

‘SOLD ALL MY VALUABLES’

Pakistan has some 163,000 HIV and AIDS patients, of whom only 25,000 are registered with provincial and federal AIDS control programs, said Zafar Mirza, a health adviser to Prime Minister Imran Khan.

At Pakistan’s request, the World Health Organization (WHO) and the U.S. Centers for Disease Control and Prevention (CDC) have sent a team of experts to the area. They are expected to visit Ratodero on Friday.

“They will carry out a proper investigation into how this outbreak too place,” Mirza told reporters. “I hope in the coming few weeks we will know the reasons.”

The government has ordered 50,000 HIV screening kits and is setting up three treatment centres. Adult patients are receiving anti-retroviral drugs and medicines have been ordered for children, Mirza said.

The Ratodero cases underscore the dire state of healthcare in Pakistan, a nation of 208 million where almost a third of the population lives on less than $3.20 a day and where many people cannot afford expensive medical tests or drugs.

“I have sold all my valuables for treatment. Now I can’t afford to go Karachi for my children’s medicines every month,” said Tariq, who lives in a village near Ratodero.

Tariq, his wife and daughter are HIV positive, and a nephew tested positive this month. He does not know how they became infected.

“There are 16 HIV cases in our village alone. No one has come to see our plight,” he said.