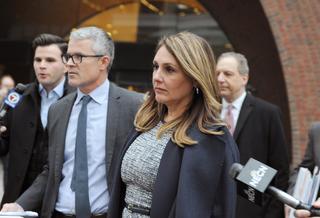 BOSTON (Reuters) – A California woman whose family’s company created the microwavable snack Hot Pockets was sentenced on Tuesday to five months in prison for paying $300,000 to help her daughters gain an illicit edge in the college admissions process through cheating and fraud.

Federal prosecutors in Boston had sought a 21-month prison term for Michelle Janavs, 49, after she admitted she was among the wealthy parents who took part in the largest college admissions scam ever uncovered in the United States.

Gorton also ordered Janavs to pay a $250,000 fine. In court, Janavs said she was “so very sorry that I tried to create an unfair advantage for my children.”

Janavs is among 53 people charged with participating in a scheme in which parents conspired with a California college admissions consultant to use bribery and other forms of fraud to secure the admission of their children to top schools.

The 36 parents charged since March 2019 include “Desperate Housewives” actress Felicity Huffman, who was sentenced in September to 14 days in prison, and “Full House” star Lori Loughlin, who is fighting the charges.

Janavs is a former executive at Chef America Inc, a closely-held food manufacturer her father co-founded that created the microwave snack line Hot Pockets before being sold to Nestle SA for $2.6 billion in 2002.

Prosecutors said Janavs paid Singer $100,000 to have an associate take the ACT entrance exam at a test center Singer controlled through bribery in place of her two daughters in order to inflate their scores.

The associate was Mark Riddell, a Florida private school counselor who has pleaded guilty to taking SAT and ACT college entrance exams in place of Singer’s clients’ children or correcting their answers while acting as a test proctor.