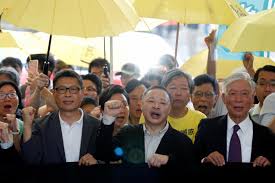 The sentences came after nine leaders of the Occupy movement were found guilty of public nuisance during the protest in a trial that critics said underscored the decline of political freedoms in the former British colony.

The trio were found guilty of conspiracy to commit public nuisance over their leading role in planning and mobilizing supporters during the 79-day protest. They had pleaded not guilty to the charges.

It’s April in Paris, but French told to stay indoors