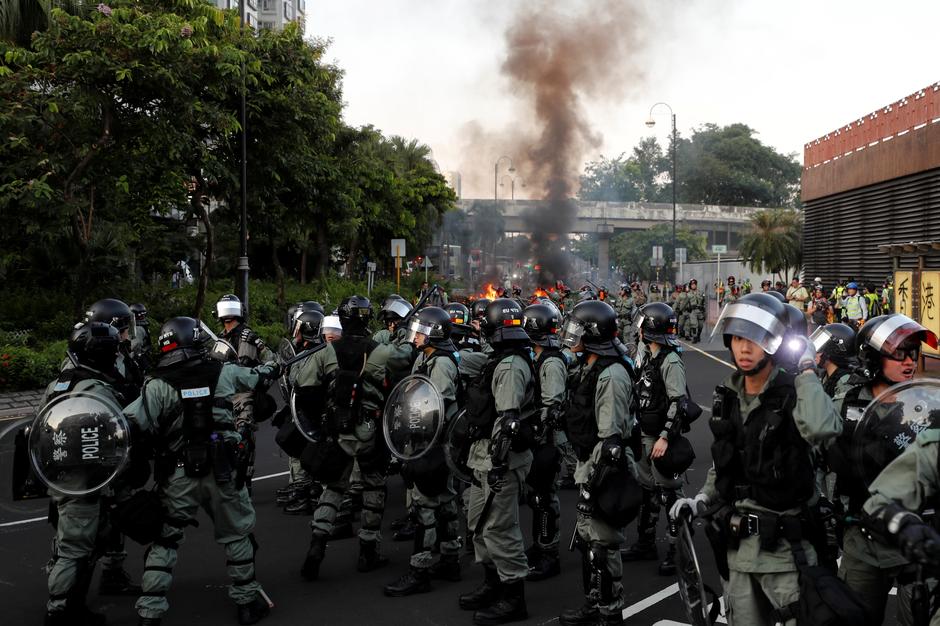 It was the biggest of several clashes across the Chinese-ruled city, most taking place in or near Mass Transit Railway (MTR) stations, now a familiar target of attack.

Hundreds of protesters, young and old, had gathered in the New Town Plaza in the New Territories town of Sha Tin, chanting: “Fight for freedom” and “Liberate Hong Kong.”

Protesters called for a boycott of businesses seen as pro-Beijing and made a paper chain of receipts from those stores, which were then hung across the mall.

Activists rounded on a man believed to have opposed them when they had trampled on the Chinese flag. Shouting, they pushed him into a corner beside the station and cheered as crowds punched and kicked him.

After 20 minutes, he managed to walk away, dazed and bleeding from the forehead. Protesters also smashed video cameras and ticket booths in the station.

Some started to trash fittings at the entrance of the mall. The protesters then spilled outside where they set fire to barricades made of cardboard, broken palm trees and other debris.

Police fired tear gas after coming under attack from bricks dug up from pathways.

Violence has hit parts of the former British colony at different times over the last three months, but life goes on as normal for most people most of the time.

However, pictures of petrol bombs and street clashes broadcast worldwide present a huge embarrassment for Beijing just days ahead of the 70th anniversary of the founding of the People’s Republic on Oct. 1.

The Hong Kong government has already called off a big fireworks display to mark the day in case of further clashes. China, which has a People’s Liberation Army garrison in Hong Kong, has said it has faith in Hong Kong leader Carrie Lam to solve the crisis.

The protesters are angry about what they see as creeping Chinese interference in Hong Kong, which returned to China in 1997 under a “one country, two systems” formula intended to guarantee freedoms that are not enjoyed on the mainland.

China says it is committed to the arrangement and denies meddling. It has accused foreign governments including the United States and Britain of inciting the unrest.

There was also a noisy standoff between protesters and police at the Tsing Yi interchange station, which serves the Airport Express and the MTR.

There were also scuffles at the Kwai Fong MTR, near Tsing Yi. Activists lit a street fire outside Prince Edward MTR station, north of the Tsim Sha Tsui shopping district, where police said they would use tear gas to disperse them.

Police closed Kowloon station, also on the Airport Express route, where about 400 protesters had gathered, shouting abuse and vandalizing property.

Protest violence has often targeted the MTR, which is blamed for closing stations at the government’s behest to stop demonstrators gathering.

Protesters are also demanding that the MTR hand over CCTV footage of police beating protesters on a train at Prince Edward station as they cowered on the floor, smartphone footage of which went viral online.

Police fired tear gas to disperse protesters who threw petrol bombs in two new towns on Saturday after pro-China groups pulled down some anti-government graffiti. There were violent clashes elsewhere in the city.

Police condemned the violence and said there had been many serious injuries in clashes between people of “different views”.

Pro-democracy protesters have targeted the airport before, occupying the arrivals hall, blocking approach roads and setting street fires in the nearby town of Tung Chung.