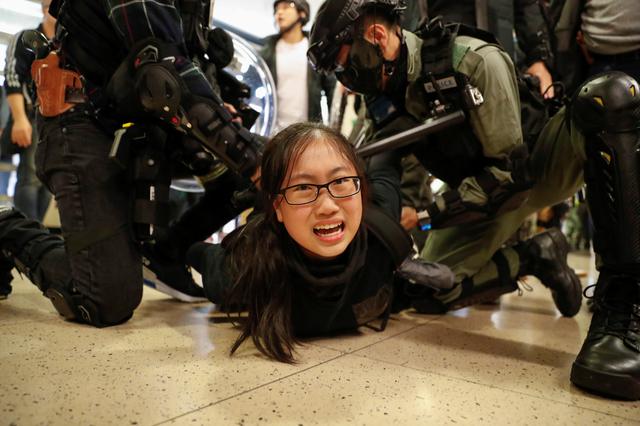 HONG KONG (Reuters) – Small groups of protesters gathered in shopping malls across Hong Kong on Sunday amid brief scuffles with riot police as attention turned to an upcoming meeting between Hong Kong’s leader and China’s president.

Hong Kong leader Carrie Lam is scheduled to meet Chinese leader Xi Jinping in Beijing on Monday and some observers say the visit could yield fresh directives including a possible cabinet reshuffle.

Lam, however, appeared to play that down before she left, saying the first task was to curb violence and restore order.

On Sunday in the peak shopping season ahead of Christmas, groups of masked protesters, clad in black, marched through several malls chanting slogans including “Fight for freedom” and “Return justice to us”.

They also say they are responding to excessive use of force by police. Last Sunday, a protest march drew around 800,000 people, according to organizers, suggesting the movement still has significant public support.

The government is planning more public dialogue through social media channels, as well as a second town hall session with top officials to try to bridge differences.

Despite the febrile public mood, China maintains it is committed to the “one country, two systems” formula granting Hong Kong autonomy and says it fully supports Lam.