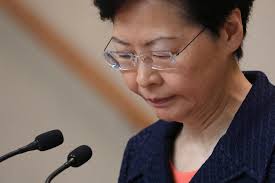 HONG KONG (Reuters) – Embattled Hong Kong leader Carrie Lam said on Tuesday she hopes a non-violent weekend protest that saw hundreds of thousands take to the streets in an anti-government rally was the beginning of efforts to restore peace in the Chinese-ruled city.

Sunday’s protest was the calmest since the latest demonstrations against perceived creeping Beijing influence in the former British colony escalated in mid-June.

Chief Executive Lam also said the would immediately set up a platform to hold dialogue with people of all backgrounds.