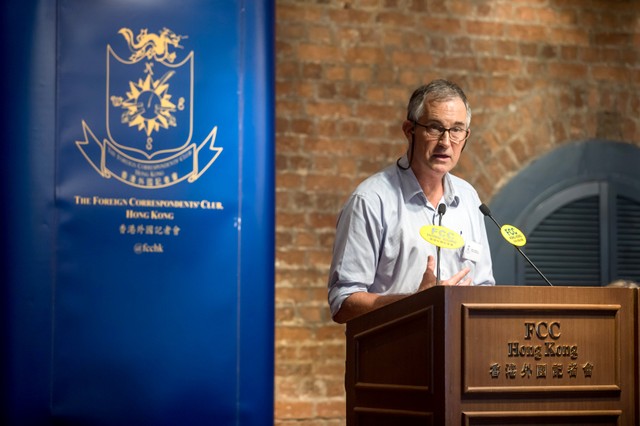 HONG KONG (Reuters) – Hong Kong leader Carrie Lam on Tuesday would not explain why authorities rejected a work visa renewal for a prominent British journalist, in an unprecedented case that has tarnished the city’s reputation and stoked outrage.

Victor Mallet, the Asia editor for the Financial Times newspaper, who has been based in Hong Kong for the past two years, was told last week his work visa would not be renewed.

Zhang Xiaoming, the head of Beijing’s Hong Kong and Macau Affairs Office, told reporters at the time that the FCC had broken the law by hosting a “separatist” and was in effect aiding separatism.

The FCC, one of Asia’s leading press clubs, which has hosted Chinese and Hong Kong officials among other prominent speakers, said it neither endorsed nor opposed presenters’ views, but that was an institution that championed free speech.

Hong Kong’s leader Carrie Lam, however, addressing the controversy directly for the first time, skirted questions on whether Mallet was being punished for hosting Chan.

“What you said is pure speculation,” she told reporters.

But she declined to explain why Mallet has been effectively forced to leave the Asian financial hub. She reiterated the position of other senior officials that authorities would not comment on an individual visa, and that the decision accorded with the law and the specific circumstances of the case.

Hong Kong, a former British colony, reverted to Chinese rule in 1997 amid guarantees the territory would enjoy a high degree of autonomy and freedoms under a “one country, two systems” formula.

Critics say Hong Kong’s rights landscape has deteriorated in recent years amid a spate of controversies, including the jailing of young activists and disqualifications of pro-democracy lawmakers from the legislature.

The diplomatic unease has spread.

“In the absence of a credible alternative explanation from the authorities, the decision appears politically motivated and therefore raises serious concerns about freedom of the press and freedom of expression in Hong Kong.”

A spokesman for the Australian consulate in Hong Kong told Reuters it was concerned, and urged the Hong Kong government to “safeguard freedoms” as enshrined in the Basic Law.

Lam would not offer specifics on whether other journalists would face repercussions for reporting on the topic of independence or speaking with independence activists.

“I’m sorry, I cannot tell you exactly how journalists should say, or act, or interview, but I can assure you … freedom of expression, freedom of reporting, are core values in Hong Kong.”

Mallet, who is in Hong Kong on a tourist visa that expires on Sunday, thanked supporters, from journalists and lawyers to citizens.

More than 10,000 people have signed an online petition for authorities to reverse the decision and allow the journalist to work in the city again.

“I am very grateful to all those who have signed this petition, particularly those from Hong Kong, which has been home to our family for a total of more than 7 years,” he wrote on Facebook.