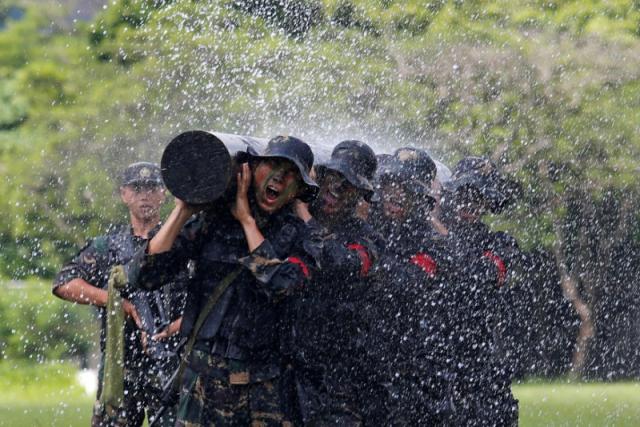 People's Liberation Army soldiers perform at an airbase in Hong Kong, China June 30, 2018, a day before the 21st anniversary of the city's return to Chinese sovereignty from British rule. REUTERS/Bobby Yip

HONG KONG (Reuters) – Hong Kong will on Sunday mark the 21st anniversary of its return to Chinese rule, with city leader Carrie Lam struggling to win over residents even as she receives praise from Beijing.

Lam took over as governor of the former British colony a year ago, pledging at a ceremony attended by Chinese President Xi Jinping to be accountable to both Beijing and Hong Kong.

But many in Hong Kong say she has only succeeded in the first part of her vow.

“She has neglected her primary and most important duty … which is to stand up and speak for Hong Kong,” the city’s former civil service chief, Anson Chan, said in a television interview on Thursday.

Tens of thousands of people are expected to march on Sunday in an annual rally to demand full democracy and vent their frustration over rising prices in the world’s least affordable real estate market.

Turnout will be a key indicator of public sentiment at a time when the opposition in Hong Kong has seen activists jailed and others barred from running in a by-election.

While critics in Hong Kong have questioned her commitment to the autonomy and freedoms under the “one country, two systems” formula, agreed at the time of the city’s handover to China in 1997, Beijing has praised her leadership.

“You have adopted a series of policies … to promote Hong Kong’s economic development and social harmony,” China’s Vice Premier Han Zheng said after meeting Lam in Beijing on Tuesday.

“I congratulate you,” he said.

An organizer of the Sunday protest, Sammy Ip, said the rally would not target Lam but focus on a broad push against Beijing’s perceived encroachment into the city.

Lam was chosen by a largely pro-Beijing committee of some 1,200 people in the city of 7.3 million.

Unlike her hawkish predecessor, Leung Chun-ying, whose unpopularity helped to galvanize the opposition, Lam won some early support by presenting a softer image.

Lam said on Friday the criticism did not bother her.

“At this last stage of my public career, I have the opportunity to plan the future for Hong Kong. I think it really is an immense honor,” she told reporters. “So I’m not worried about criticisms, attacks or popularity ratings”.

While Hong Kong activists push for greater democracy, the city is being inexorably drawn into mainland China’s sphere, and some Hong Kong residents say the old border that has defined the city’s autonomy is slowly withering away.

The projects are part of a broader Beijing plan, overseen by Xi, to integrate the city into the Pearl River Delta and improve the flow of people and money between Hong Kong and the mainland.

A joint immigration checkpoint inside a train station on Hong Kong soil will be regarded as mainland territory governed by mainland laws.

Critics argue this will blur the border that has safeguarded Hong Kong’s core values and freedoms.

“This is the biggest assault against ‘two systems’ since the handover. It creates a breach, a precedent,” said Joseph Wong, a retired senior government official.

“This administration does not show that it is willing to strongly argue for Hong Kong people’s interests in front of mainland authorities,” he said.