Hong Kong eager to cause an upset in Guangzhou 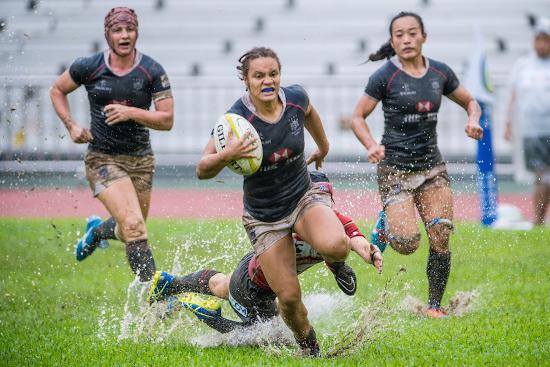 Eight women's teams compete in Guangzhou this weekend (9-10 November) for Asia’s second place at the Olympic Games, with Hong Kong ready to throw down a fierce challenge to the host nation and tournament favourites China as they bid to join Japan at Toyko 2020. Picture: WORLD RUGBY

Having enjoyed a successful season as a core team on the HSBC World Rugby Women’s Sevens Series in 2019, culminating in an impressive seventh-place finish in the concluding leg in Biarritz, China go into this weekend’s Olympic qualification tournament as favourites to book their ticket to Tokyo 2020.

China will also enjoy home support at the Guangzhou University Town Sports Centre as they strive to win the eight-team event; however, confidence is high within the Hong Kong camp that they can make it to sport’s biggest showpiece occasion instead.

With good reason, all eyes will be on the match-up between the two teams at the end of day one as this could have a significant bearing on the overall outcome. Sri Lanka and Korea complete the Pool A line-up, while Kazakhstan and Thailand, who are both capable of springing a surprise of their own, are joined by Singapore and Philippines in Pool B.

“The girls have taken a page from South Africa at the Rugby World Cup. South Africa does not always show their best but perform in the big moments. We know we have the potential to compete with anyone – and now we have an opportunity to show it,” said Hong Kong women’s sevens head coach Iain Monaghan.

Hong Kong’s squad includes four veterans of the last tilt for qualification, with Natasha Olson-Thorne (pictured), Sham Wai-sum, Chong Ka-ya and Nam Ka-man present in 2015. At the other end of the experience scale, 17-year-old schoolgirl, Anna Birkett, has also been included after impressing on a recent tour to Canada, with the potential to earn a first senior cap in one of Hong Kong’s biggest rugby moments.

“We have some seasoned campaigners with Rugby World Cup experience, players who know big moments and bring a lot of leadership. That leadership is hugely important for us in-game, to unlock our speed and power and help us capitalise on our abilities,” said Monaghan, highlighting the good blend to his squad.

“I’ve got 100 per cent belief in the girls and their ability to show who we are. These past 10 months have shown we can compete against anyone; there have been some tough learnings, and we have scars to show for it, but they know they can do it.”

One direct qualification spot will be available to the winner of this weekend’s Asia qualifier with the second and third-placed teams booking their place in the World Rugby Global Repechage competition in June 2020 – the final opportunity for Olympic qualification.

All matches will be streamed live on the Asia Rugby website.