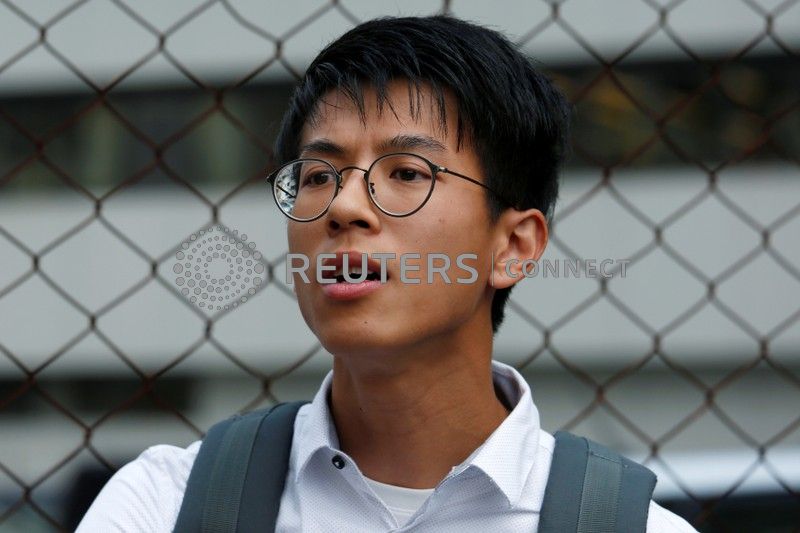 FILE PHOTO: Ray Wong, one of the leaders of localist group Hong Kong Indigenous, leaves a court in Hong Kong, China, September 23, 2016, with nine other defendants after pleading not quilty on charges relating to Mongkok riots during Lunar New Year. REUTERS/Bobby Yip/File Photo

Ray Wong, 25, and Alan Li, 27, both told Reuters by telephone they were granted refugee asylum status in Germany in May 2018. Wong showed a document setting out that status.

“We have become the first two political refugees (from Hong Kong) in Europe,” said Li.

Hong Kong’s Secretary for Security John Lee skirted questions from the media on whether the city would seek to extradite the pair from Germany.

The German consulate in Hong Kong said it was aware that the two Hong Kong residents were staying in Germany, although it could not provide details on individual cases.

“We ask the German side to respect Hong Kong’s rule of law and judicial independence and stop interfering,” spokesman Lu Kang said on Thursday.

Wong and Li, former members of Hong Kong Indigenous, a group advocating Hong Kong’s independence from China, were charged for rioting linked to a protest that turned violent in February 2016. The pair later skipped bail and fled to Germany in 2017 via Taiwan.

Hong Kong activists have become increasingly defiant in recent years amid fears of creeping interference from Beijing despite a promise of special autonomy.

Scores of activists have been jailed on various charges including contempt of court and public nuisance, with critics saying Hong Kong authorities were prosecuting them to stifle freedom of expression and assembly.

“Our success in gaining political refugee status reflects the situation in Hong Kong is worsening in the eyes of the international community. Hong Kong has changed completely from the past,” Li said.

Both Wong and Li said they decided to break their silence given their alarm at a proposed extradition law that will extend Beijing’s control over the financial hub.

“They would make use of the extradition law to suppress the democratic movement (and) dissidents,” said Wong.

Chris Patten, Hong Kong’s last British governor before it returned to Chinese rule in 1997, said in an interview with Bloomberg that the extradition law was the “worst thing” to happen since then, and could jeopardise the city’s status as a global financial hub.

Wong said freedoms in Hong Kong had been destroyed by Beijing and the Hong Kong government since the city was handed back from British rule under a “one country, two systems” deal meant to ensure freedoms not allowed in mainland China including an independent judiciary.

The proposed extradition law would allow people in the city accused of a crime, including foreigners, to be extradited to countries without formal extradition agreements, including mainland China.

Hong Kong authorities have stressed the extradition law would not be used to prosecute political crimes, but Wong said he feared it could be used to suppress the pro-democracy movement, as Beijing could extradite activists to China.

The pair lived in three refugee camps in Germany for more than 10 months until August last year. They said they shared a room with up to 10 people at times, including ethnic Uighur and Tibetan refugees fleeing persecution in China.

Both have been learning German and hope to study at a German university while continuing to defend Hong Kong’s rights.

“It’s a very sad thing that I needed to leave Hong Kong,” said Li. “I predict that once the law is passed, more and more people will seek refuge in other countries.”