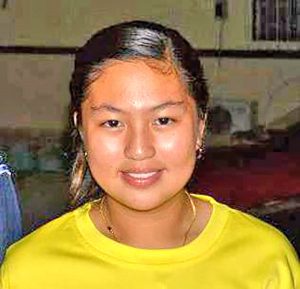 Janelle Panglilinan is among seven players who will represent the Northern Marianas Badminton Association and CNMI in the 2019 Pacific Games in Samoa. Picture: SAIPAN TRIBUNE

SAIPAN, 02 MAY 2019 (SAIPAN TRIBUNE) – Seven players will represent the Northern Marianas Badminton Association and CNMI in the 2019 Pacific Games in Samoa.

Nate Guerrero, siblings Jordan and Janelle Pangilinan, brothers Ezekiel and Daniel Macario, Nicole Malasarte, and Andreau Galvez are the members of the elite squad, which is the first group that NMBA will be fielding in the regional competition.

“It feels great to be a part of the team and most especially the first squad to join the badminton tournament in the Pacific Games,” said Guerrero, who is also the team’s captain.

Guerrero and company have been training for the Pacific Games that will run from July 7 to 20 since the first quarter of the year and he likes the significant improvement the team has shown.

“Right now, the training sessions are going great. We are actually practicing pretty well-considering everyone’s busy schedule with work and school. The focus is to minimise mistakes and adjust to our partners,” said Guerrero, who has consistently placed in tournaments NMBA hosted in the past years.

“Not having any kind of coaching before, we rely on each other and videos to pick up new things,” the team captain added.

Guerrero, Daniel, and Galvez are the veterans on the squad with the latter a perennial contender in Class A of local tournaments and had his share of victories in a couple of events in Guam. Ezekiel, Malasarte, and the Pangilinan siblings are the young guns but are regulars in NMBA-sanctioned competitions.

Asked about their chances in the Pacific Games, Guerrero said they are capable of producing positive results in Apia.

“The team has been really putting in an effort to practice and learn. I could say that everyone is a lot better than last year and having said that, I am confident that we will have good results in Samoa,” said Guerrero, adding that New Caledonia and Fiji will be the teams to watch in the quadrennial meet.

“There are a lot of good teams out there, but I think New Caledonia and Fiji will be the toughest, assuming New Zealand and Australia won’t be competing,” the former Little League player said.

Australia and New Zealand, as of yesterday, are not listed among the countries that will be competing in badminton. Fiji, New Caledonia, and the CNMI are joined on the list by the hosts, American Samoa, the Cook Islands, the Federated States of Micronesia, Guam, Kiribati, Papua New Guinea, the Solomon Islands, Tahiti, and Tuvalu. The 14 nations will play in the men’s and women’s singles and doubles and mixed doubles events from July 8 to 13.

“We all are aware of what a great opportunity this is and we are excited to get some experience playing in an off-island tournament like this. However, the main goal/objective is to go out there and win. Being the first champions for badminton in the Pacific Games would be a great achievement,” Guerrero said.

Meanwhile, NMBA president Merlie Tolentino recognizes the significance of their participation in the Pacific Games.

“We would like to build on this momentum (NMBA’s historic participation in the Pacific Games) as we aim to strengthen the sport in the CNMI. We will also continue working on finding and developing talents, especially among our youth, for us to have a steady pool of players that can represent our islands in more international and regional competitions in the future,” Tolentino said.