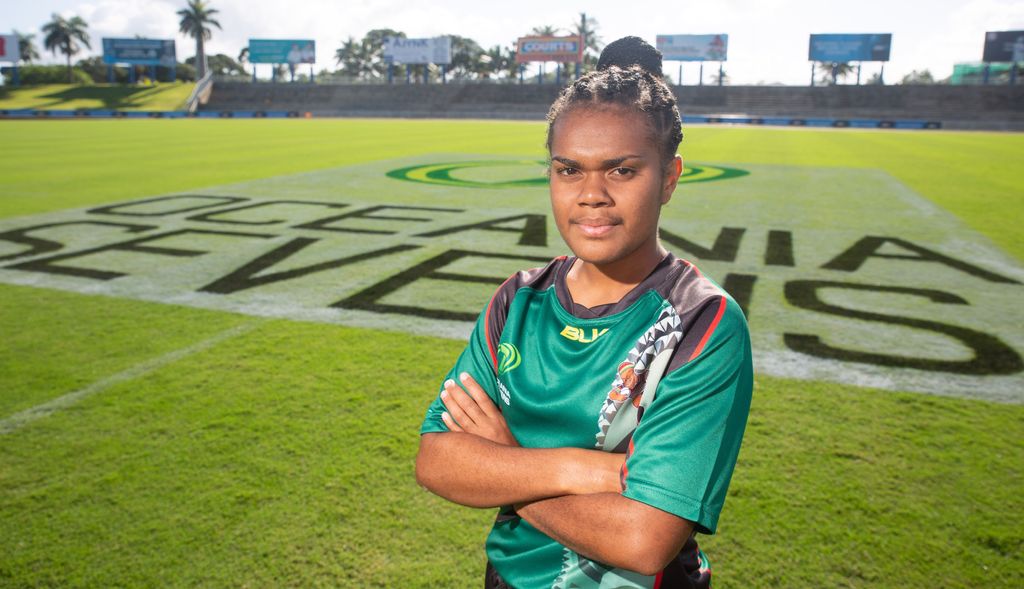 Vanuatu women's sevens made their international debut against Fiji in Suva on Thursday and Head of Vanuatu Women’s Rugby, Annie Kalo, is hopeful it can encourage growth in female participation. Picture: WORLD RUGBY

The Oceania Rugby Women’s Sevens Championship kicked off in Suva on Thursday with all eyes on qualification for Tokyo 2020. But for Vanuatu, history has already been made.

Vanuatu were led out by captain Rachelle Tari at ANZ Stadium as the small Pacific Island nation made its debut in international women’s competition against Fiji.

A 48-0 defeat against the hosts – and favourites to secure their place at next year’s Olympic Games on Saturday – followed, however, success for Tari and her team-mates over the next few days will not be measured on the pitch.

Representing a country that is home to just over 275,000 people, competing against a HSBC World Rugby Sevens Series core team is in itself a huge achievement.

Head of Vanuatu Women’s Rugby, Annie Kalo, did not expect to watch her countrywomen cause a shock in their tournament opener. The hope is, rather, that the presence of a women’s team in Suva will help inspire more female Vanuatuans to take up the sport.

“In Vanuatu, rugby is really focused as a men’s game,” Kalo said. “Building up women and training them to play rugby is a bit difficult for us.

“A lot of women here focus more on soccer than rugby, but we’ve got a few teams and we’re hoping that being able to participate in the [Oceania] tournament will give more ladies who are around an excuse to come and participate in rugby union matches here, locally.

“So, that they know that by playing rugby they may get to represent their country somewhere else.”

Kalo has played a pivotal role in the growth of women’s rugby in Vanuatu. It was her idea to form women’s teams within the two most popular men’s clubs on the island, with each soon fielding two females sides.

Although subsequently there was “a long break” in consistent women’s rugby played on the island, the new Vanuatu Rugby Football Union executive has been keen to promote female participation.

Girls are now being introduced to the sport in secondary school while an under-19 squad toured New Caledonia in July.

The senior women’s squad has been in camp since June, and got a taste of international sevens that month when the New Caledonia women’s team stopped off on the island on route to the 2019 Pacific Games in Samoa.

According to Kalo, that experience gave Vanuatu’s women confidence as it proved that they were “not much different to our girls” while there was an excitement at being the first female team to represent the country in sevens.

On what success in Suva would look like, Kalo added: “Right now my only focus is, after the tournament, what will help us to proceed the success of women’s rugby in Vanuatu when the girls come back.

“Gaining the experience so that more girls will want to come and play rugby because of this tournament next year.

“When we come back we need all the girls to bring their own teams to the local competitions so we have more players.”

Women’s rugby still faces a number of challenges in Vanuatu. There are the negative comments players are sometimes subjected to, while the team has struggled to attract sponsors and the sport has to compete with rugby league and soccer for prominence.

But Kalo did afford herself the chance to dream as she pondered what Olympic qualification would mean to rugby on the small Pacific Island.

“Wow!” she said. “It would be something very big for us, not only for the team but for the country as well.

“We’ve been getting some negative comments in the media and all that because of women playing rugby, but we put the comments aside.

“We do not expect to win but if we do win that would be a very big thing for us. I’m sure the doors would be open for us next year and from after that onwards.

“This time it’s very hard for us to get sponsored as well but if the girls win I’m sure that rugby for women in Vanuatu would just grow.”