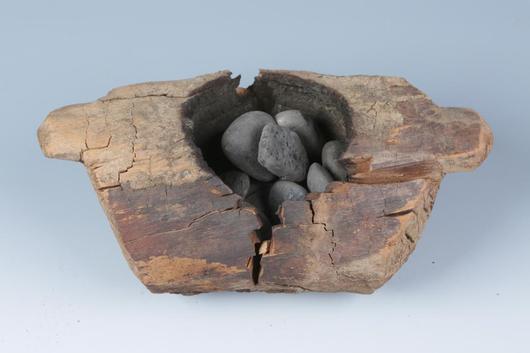 A wooden brazier and burnt stones from an archaeological site in western China that provided evidence for the burning of cannabis at a cemetery locale roughly 2,500 years ago, is shown in this image from the Pamir Mountains in Xinjiang region, released from Beijing, China, on June 12, 2019. Courtesy Xinhua Wu/Handout via REUTERS

WASHINGTON (Reuters) – Marijuana chemical residue has been found in incense burners apparently used during funerary rites at a mountainous site in western China in about 500 BC, providing what may be the oldest evidence of smoking cannabis for its mind-altering properties.

The evidence was found on 10 wooden braziers containing stones with burn marks that were discovered in eight tombs at the Jirzankal Cemetery site in the Pamir Mountains in China’s Xinjiang region, scientists said on Wednesday. The tombs also bore human skeletons and artifacts including a type of angular harp used in ancient funerals and sacrificial ceremonies.

The researchers used a method called gas chromatography-mass spectrometry to identify organic material preserved in the braziers, detecting marijuana’s chemical signature. They found a higher level of THC, the plant’s main psychoactive constituent, than the low levels typically seen in wild cannabis plants, indicating it was chosen for its mind-altering qualities.

“We can start to piece together an image of funerary rites that included flames, rhythmic music and hallucinogen smoke, all intended to guide people into an altered state of mind,” the researchers wrote in the study published in the journal Science Advances, perhaps to try to communicate with the divine or the dead.

Yimin Yang, an archaeological scientist at the University of Chinese Academy of Sciences and the study’s leader, called the findings the earliest unambiguous evidence of marijuana use for its psychoactive properties.

“We believe that the plants were burned to induce some level of psychoactive effect, although these plants would not have been as potent as many modern cultivated varieties,” added Robert Spengler, director of the Max Planck Institute for the Science of Human History’s Paleoethnobotanical Laboratories in Germany.