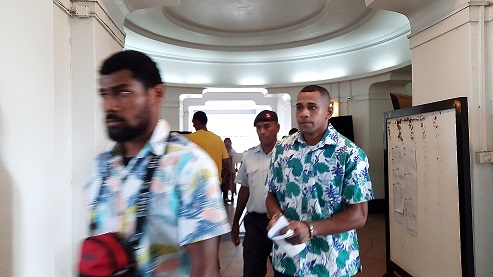 Alleged murderer Tevita Qaqa Kapawale has withdrawn his instructions from Suva lawyer Nemani Tuifagalele and is no longer represented by Mr Tuifagalele.

The case in which Mr Kapawale is accused of alleged murders aboard the fishing vessel MV Tiro II in May 2021 was called before High Court judge Justice Daniel Goundar in the High Court in Suva last Thursday.

Mr Kapawale earlier pleaded not guilty to five counts of murder and one count each of attempted murder and criminal intimidation.

Mr Kapawale told the court he was withdrawing his instructions to Mr Tuifagalele, claiming that Mr Tuifagalele was being paid by the “two complainants” and would not be fair counsel.

Justice Goundar said Mr Tuifagalele did not have to answer to Mr Kapawale’s allegations.

Justice Goundar told Mr Tuifagalele to return all the case documents to the State and told the accused that his function was to try him on the charges against him and to do so fairly.

“One important part of the process is that you be represented by counsel,” Justice Goundar said.

“I can’t force you to engage counsel, it’s entirely your choice, but you have a right to legal representation by counsel of your choice.”

Mr Kapawale said he wanted to apply for bail so he could find another lawyer and that he was not going to apply for legal aid assistance.

Justice Goundar said seeking legal counsel was not grounds for granting bail in cases of this nature and told the accused to work through his family to engage a lawyer before the court moved forward with the bail application.

“I won’t be able to move forward with your substantive matter unless and until you tell me what you are going to do.”

Mr Kapawale said he had his voir dire grounds prepared but Justice Goundar told him to hold on to it.

“I don’t want you to file or say anything that may incriminate you and may be used against you in court.”

The matter will be called on July 20 for mention to check on whether the accused has engaged a lawyer.