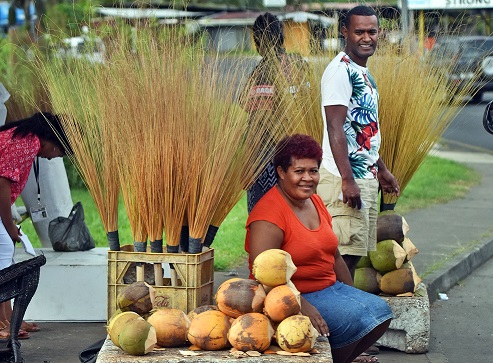 This is the view of the father of two when asked about what he would like Government to include in the 2019/2020 National Budget that will be announced tonight.

Mr Waqaidrovu works as a maintenance worker at the Homes of Hope at Wailoku in Suva and earns about $200 a week.

Apart from his day job, he also sells sasa (brooms) along Jerusalem Rd in Nabua, Suva with his wife to help make ends meet.

He said his $200 salary could only last them for a day.

As soon as he receives his salary, he said he would pay his bills, purchase food “and no money would be left”.

The 32-year-old said his mother-in-law had been selling sasa for over 20 years so he decided to join her and use it as a means to cater for the needs of his family.

He said money earned from selling sasa was not much, but it had somehow helped his family in numerous ways.

“The cost of basic food items is really expensive and I have kids who are in school, and despite the free education we as parents still need to ensure that our children are well looked after because this is our role,” he said.

“I started selling sasa with my wife a year ago and even though the profit earned is not favourable at times, it has somehow assisted me to put food on the table for my family.

“For this year’s budget, I’d like Government to take into account the needs of ordinary people like me and at least decrease the prices of basic food items.

“With the rate that we are going, I think we will need to have more than one job in order to survive.”

His mother-in-law, Nanise Maqanaula, said life in Fiji is expensive.

“I’ve been running this business for over 20 years and we need to buy the materials for the sasa so even having your own business is expensive,” she said.

“Hard work is important, but I believe Government should seriously look into the prices of basic food items and do something about it.”