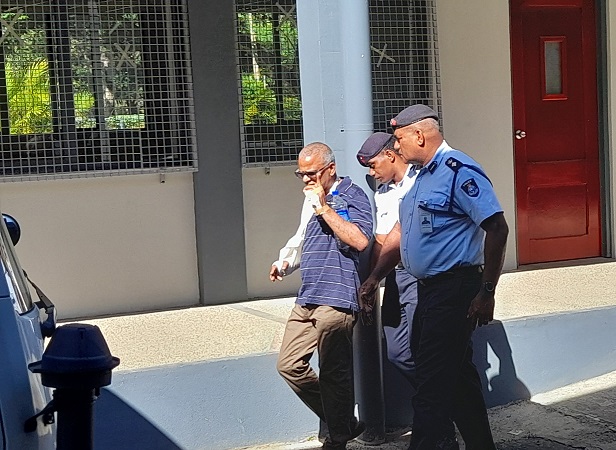 Amrit Sen is being escorted by police after his High Court bail hearing in Labasaon Thursday, June 23, 2022. Picture: SERAFINA SILAITOGA

The High Court in Labasa yesterday deferred the hearing for the bail application of four people allegedly involved in the Nasikasika accident which claimed the life of Jone Rusiate, 49.

However, they were represented by Abhay Singh who told the court that he applied for an early bail for Mr Sen based on medical grounds.

On June 20, the Magistrates Court referred the matter to the High Court for a June 30 hearing on their bail application.

Mr Singh said it involved a 10-day wait and he needed to make an early bail application.

He also told the court that Mr Sen was a victim in the alleged incident and only the media and social media had attacked him without knowledge of the facts.

However, Director of Public Prosecutions counsel Michelle Lomaloma told the court that the offences were serious and the case was of public interest.

She asked for time to respond to the bail application.

Justice Aluthge granted more time to the DPP team and adjourned the case to June 28.