Hibiscus Festival to be held at Valelevu grounds 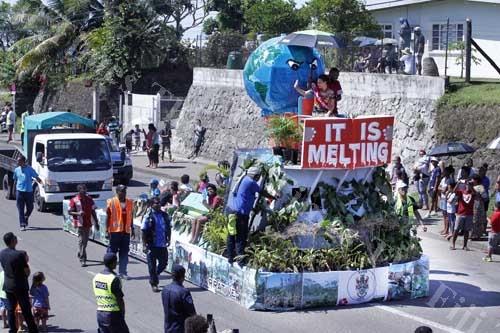 Miss Dove float at the procession during the last day of the Vodafone Hibiscus Festival 2017. Picture: ATU RASEA/FILE

SINCE its inception in 1956, the Hibiscus festival will this year have a new venue and it will not be at it’s usual home, Suva.

Now known as the Vodafone Fiji Hibiscus festival, the Mother of all Festivals 2018 will be held at the Valelevu grounds in Nasinu.

This was confirmed by the Hibiscus Events Group chairman Hirdesh Prasad in an interview this afternoon.

Mr Prasad said after a lot of soul searching the festival committee has finally found a venue which fits the magnitude of the festivals we have which is the Valelevu grounds.

He said the Vodafone arena is not available and other places are not suitable because of public safety and security.

Meanwhile Mr Prasad said the committee have chosen the contestants that will be competing in five categories.

“This year’s theme will be focused on the environment on the 5 R’s: Refuse, Reduce, Reuse, Repurpose, Recycle,” Mr Prasad said.