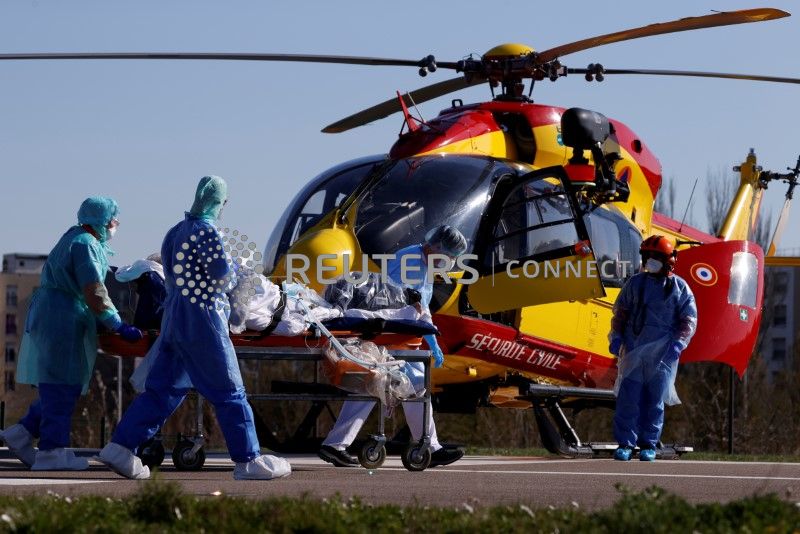 FILE PHOTO: A patient infected with coronavirus is carried on a stretcher by a French rescue team before being transferred by a helicopter of the civil security (Securite Civile) from Strasbourg university hospital to Pforzheim in Germany as the spread of the coronavirus disease (COVID-19) continues, in France, March 24, 2020. REUTERS/Christian Hartmann

STRASBOURG, France (Reuters) – Medical workers dressed head-to-toe in protective gear emerge from Strasbourg university hospital, push a coronavirus patient on a wheeled stretcher across the parking lot, load the patient into a helicopter, then retreat as the aircraft lifts off.

This has become a daily ritual in eastern France as intensive care units there have been unable to cope with the numbers of critically-ill cases and have instead been transferring patients to nearby Germany, Switzerland and Luxembourg.

As one patient on Tuesday was loaded onto a red-and-yellow helicopter of the French Civil Security agency, a helicopter crewman watched over, dressed in blue surgical scrubs, topped with an orange aviation helmet.

The area in eastern France around the city of Strasbourg has seen one of the biggest coronavirus clusters in France. Local doctors have warned that the healthcare system is at breaking point.

The so-called air bridge to fly coronavirus patients out of eastern France began at the weekend and has so far involved around 10 helicopters from France, Germany and Luxembourg.

One flight delivered a patient from a clinic in France’s eastern Alsace region to a military hospital in Ulm, southern Germany. “If everything goes well he will survive,” said German Army colonel and doctor Matthias Helm.

“Currently we have the advantage that we still have capacity and can prepare ourselves for a potential wave of cases. ”

The epidemic in eastern France led the French army to set up a field hospital with 30 intensive care beds. The field hospital admitted its first patient on Tuesday.