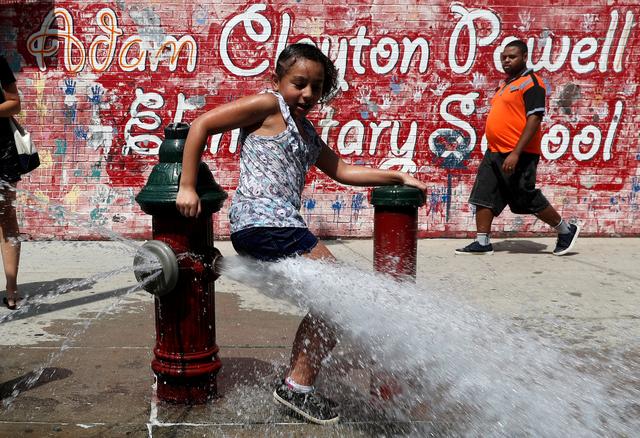 NEW YORK (Reuters) – A massive heat wave that has enveloped the U.S. Midwest pushed into the Northeast on Friday, ushering in temperatures that could top 100 degrees Fahrenheit (38 degrees C) in Washington and prompting utilities to take steps to prevent power outages.

The huge blob of warm air is likely to blanket the region, home to a third of the U.S. population, through Sunday with little overnight relief, said meteorologist David Roth of the National Weather Service’s Weather Prediction Center.

“There are 124 million people under a heat advisory or excessive heat warning – that’s a third of the population,” Roth said.

As of Friday, the heat wave sprawled from Kansas to the Atlantic Coast, and from South Carolina north to Maine. It was expected to intensify on Saturday and Sunday.

Utilities in the eastern half of the United States expect to have enough resources to meet power demand on Friday but asked consumers to turn down air conditioners to avoid putting stress on the system, which could cause outages.

“I’m very confident,” Consolidated Edison Inc (ED.N) President Tim Cawley said when asked at a news conference if the utility, which serves New York City, could quickly respond to any outages in the country’s most populous city. He said 4,000 employees were poised to work 12-hour shifts over the weekend.

On Saturday, parts of Manhattan lost power for hours, darkening Broadway theaters, halting subways and closing restaurants and shops in a partial blackout blamed on a faulty piece of equipment.

Early on Friday, as the heat intensified in downtown Madison, Wisconsin, 11,600 homes and businesses lost power after fires erupted at two substations near the state capitol. With temperatures forecast to hit 93F (34C) later in the day, Governor Tony Evers asked nonessential state workers to stay home. By midafternoon, power had been restored to all but about 3,500 customers, according to Madison Gas and Electric.