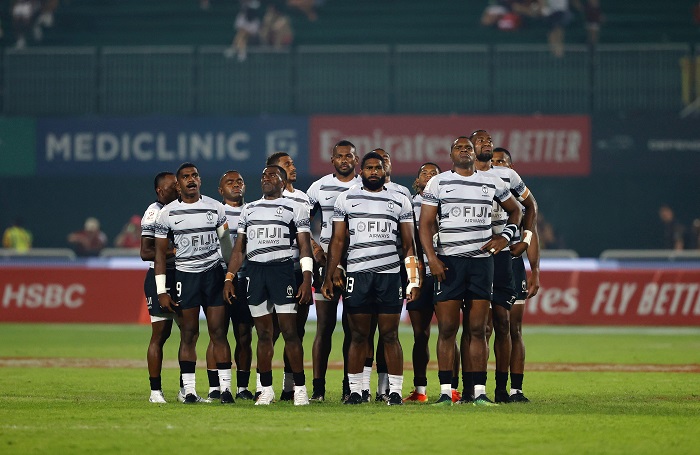 Members of the Fiji 7s team during a break at the HSBC World Rugby Sevens Series in Dubai. Picture: MARTIN SERAS LIMA

With qualification for the Paris 2024 Olympic Games resting on this season’s standings, the HSBC World Rugby Sevens Series has taken on an extra edge in 2022/23 and that was immediately apparent on a fiercely competitive opening day of the Emirates Dubai 7s.

With Fiji, New Zealand and Argentina all grouped together, Pool B was set for some epic encounters and so it proved with the race for the quarter-final spots going right down to the wire.

All three teams finished on seven points apiece having each achieved two wins and a loss, but it was Fiji who missed out on points difference. Pool A was hardly any less competitive with South Africa and Australia going through at Great Britain’s expense after a titanic tussle.

The women’s competition was a little more clear cut in terms of outcome but no less compelling as Australia were joined by New Zealand and Ireland in reeling off three consecutive wins.

For the 16 best men’s teams, this was their second hit-out of the season, having kicked off in Hong Kong a month ago, while for the best 12 women’s teams Dubai signalled the start of their Olympic qualification campaign.

The top four teams in each competition at the end of the World Series will be guaranteed a spot in the Paris 2024 line-up. The winner of the opening event of the season has gone on to be crowned women’s World Series champions in seven of the past nine seasons so, historically if nothing else, it was important for the title contenders to put out a statement of intent and that’s exactly what Tim Walsh’s allconquering Australia team did and they will now go on to meet Fiji in the fourth and final women’s quarter-final.

In Saturday’s other quarter-final ties, New Zealand will take on Great Britain, Ireland face the USA and France and Spain are set to collide for a place in the semis. In the men’s event, two of the first eight matches were draws, with Ireland and Spain sharing the spoils in the first match of the tournament before Kenya did brilliantly to tie with current World Series champions, Australia, who claimed the first gold medal on offer this season in Hong Kong a month ago.

Four of the other matches were settled by single-digit winning margins with a first win in Dubai for Argentina over New Zealand and Great Britain’s victory over South Africa being two of the standout results.

By the end of a day of twists and turns and some sensational action, all of the men’s big guns remain in contention for medals except for Fiji. Argentina play Ireland in the first of the quarter-finals on day two before USA take on Australia.

France are up against New Zealand and South Africa play Samoa in the other ties.

Maddison Levi’s prolific tryscoring form in 2022 continued as Australia racked up wins over China (36-7), Canada (33-0) and the USA (29-12). The Women’s Eagles had also won their first two games, albeit by smaller margins, and they took an early lead going into the top-of-the-table decider with the Australians following a defensive mix-up. But from that point onwards, the reigning Dubai champions took control of the scoreboard thanks to Levi, who added to her hat-tricks in the final of the Commonwealth Games and Rugby World Cup sevens with a fourtimer in a 29-12 victory against the Women’s Sevens Eagles, who had to settle for second place. Canada beat China 26-10 in the final game of pool play but fell just short of securing a place in the last eight as one of the best two third-place sides.

Ireland recorded their best finish to the Women’s Series last season, by taking fourth place on the standings, and started this campaign well with three straight wins to top Pool B. Spain were beaten 21-7 in their first encounter and Ireland always had enough in reserve against Japan despite a spirited comeback from the Sakura 7s, to win 31-24. Ireland rounded off a good day with a 24-17 win against Fiji, Eve Higgins crossing twice to double her tally for the tournament. Las Leonas Sevens bounced back from their defeat to Ireland with victories against Fiji (21-14) and Japan (33-7) ensuring them second place, while Fiji had done just enough to finish as one of the best two third-place sides.

New Zealand give France the blues

With New Zealand and France both defeating Brazil and a spirited Great Britain, top spot in Pool C rested on the outcome of the match between the unbeaten teams. Camille Grassineau got France off to a flyer but New Zealand powered back to score three tries without reply. Valentine Lothoz then gave Les Bleues Sevens a fighting chance with three minutes to go but a try from veteran Niall Williams and Michaela Blyde’s second of the match secured the Black Ferns Sevens a 31-12 win. Kelly Brazier’s hat-trick was the highlight of New Zealand’s 35-5 win against winless Brazil, while Great Britain were beaten 19-12. Lothoz scored twice in France’s 34-7 win against Brazil and she also got the last-gasp winner against Great Britain. Having finished within a score of the top two teams, Great Britain made it through to the quarter-finals as one of the best thirdplaced sides due to their 38-7 win over Brazil. Jas Joyce, the pride of Wales, maintained her record of scoring in every game with a first-half double.

Blitzboks edge drawn-out battle South Africa, the dominant force in Dubai in recent years, booked their passage through the quarters with a nail-biting 19-12 victory in the final match of the day over previously unbeaten Australia. That win saw the Blitzboks top Pool A by a point from Australia, who finished level in on six points along with Great Britain but with a twopoint differential going in their favour. It was an impressive turnaround from South Africa who had slipped to a 14-5 defeat to Great Britain in their opening game before beating regional rivals Kenya, 27-12. Australia had scored 40 points or more in each of their past two Series matches so to be held 19-19 went completely against the formbook. However, the reigning World Series champions showed some of the quality that took them to last season’s title in seeing off battling Great Britain, 28-19. Even so, Great Britain were right in contention for a place in the quarterfinals, but a 14-14 draw with Kenya in their final game left the door ajar for their pool rivals to take advantage.

Joseva Talacolo starred for Fiji on day one but his matchwinning try against Argentina in a thrilling Pool B finale was still not enough to save Ben Gollings’ side from another early elimination in the desert. Having beaten Uruguay 52-0 but then suffered a 24-7 defeat to New Zealand in their second match, Fiji needed to beat Los Pumas Sevens by 10 points to progress, but they fell five points short of their target, winning 17-12. Fiji have now failed to qualify for the quarterfinals in three of the last four Dubai tournaments. Instead, it is Argentina and New Zealand who go through by the narrowest of margins. They, too, easily swept aside Uruguay, and it was the All Black Sevens’ result against Fiji in a re-run of the final of Rugby World Cup Sevens 2022 that ultimately proved crucial. The biggest match of the day brought together two teams normally accustomed to facing each other in Cup finals, and All Blacks Sevens captain Sam Dickson described the match-up as “door-die”.

France, bronze medallists in Hong Kong in November, impressed on day one with a clean sweep of wins. First, they edged past Uganda, 10-7, before enjoying a more comfortable 24-10 win against Spain. That left Ireland standing in their way, with the Irish also unbeaten after following up their draw with Spain with a 35-13 win over a Ugandan side playing in Dubai for the first time in five years. The decisive game between France and Ireland always promised to be tight and there was nothing in it at half-time after Bryan Mollen cancelled out an earlier score from Aaron Grandidier. But Rayan Rebbadj’s 10th-minute try won the game for France and ensured they finished on top of the table. Ireland made it through as well due to the plus-four points differential between themselves and thirdplace Spain. Reflecting on what was a very finish, Ireland’s Hugo Lennox said: “They are the times you want to be on the pitch rather than watching from the sidelines. Yeah, we didn’t get the win but it is great to be through to the quarters tomorrow with everything to play for. There is lots to work on.”

USA produced a masterclass in game management in their final Pool D game against fellow unbeaten side Samoa. The Men’s Eagles had taken an early lead through Lucas Lacamp but Samoa responded through Owen Niue and Vaovasa Afa Sua to lead at half-time. The second half belonged to Mike Friday’s men, however, with Samoa conceding six straight penalties as they struggled to get their hands on the ball. In the end, Kevon Williams’ 10thminute try and Steve Tomasin’s conversion were enough to see the USA to a 14-12 victory. Earlier on, the USA had beaten Canada 19-14 and Japan 43-7, thanks to tries from seven different players. Samoa had looked equally impressive in defeating Japan 38-17 and Canada 33-5, Vaa Apelu Maliko capping a fine opening day for him personally with a brace of tries in the latter match.