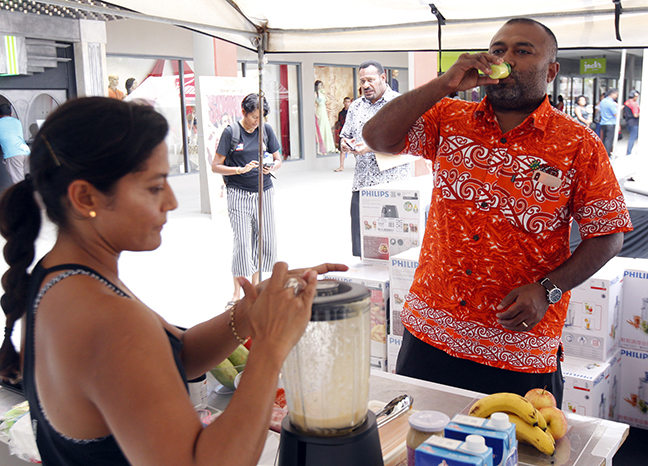 Dr Ifereimi Waqainabete drinks a glass of mixed juice prepared by Patricia Mallam a Welleness coach during the launch at Nakasi.Picture:ATU RASEA

A TOTAL of 38 million people die from non-communicable diseases (NCDs) across the globe, says Minister for Health and Medical Services, Dr Iferemi Waqainabete.

While launching the health and fitness promotion at Courts in Nakasi yesterday, he said Fiji was not alone in the fight against NCDs.

The promotion was an initiative between Courts, Sports World and the ministry. Dr Waqainabete said three quarters of deaths around the world occurred in low income families like Fiji.

“We are not alone in the fight against NCDs and it’s very prevalent around the world. “In our country the youngest diabetes patient being a 12-year-old child and one of the growing concerns is chronic NCDs,” he said.

Dr Waqainabete said over the past 14 years, cases of NCDs in Fiji had increased rapidly. He said they were silent killers that weighed a heavy burden on society.

“Imagine if the sole breadwinner of a family gets amputated because of diabetes, it will affect the quality of life of their family and it can have an impact on productivity too,” Dr Waqainabete said.

He also advised Fijians to make an effort to have healthy meals and exercise daily to avoid NCDs.