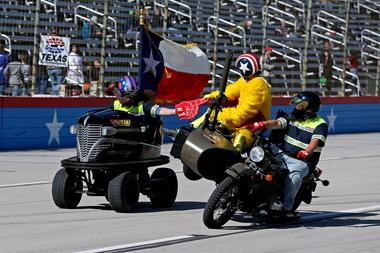 Kevin Harvick arrived at Texas Motor Speedway for Sunday’s Monster Energy NASCAR Cup race in a bit of trouble as he was 14 points below the cutline in the Series’ Playoffs Round of 8.

He left TMS trouble-free as he locked down a spot in the Championship 4 round of the Playoffs by winning the AAA Texas 500 on Sunday night.

“A lot of work put into this race,” Harvick told reporters after the race. “We knew this was a good racetrack for us. Felt like it fit the style of our cars and man, did it.”

The victory was the fourth of the season and third in his last five starts at TMS, but it was the first of the 2019 Playoffs for the 2014 champion. It came from the pole and saw him lead a race-best 119 laps.

“Texas has always been so great to us,” said Harvick, who advanced to the championship finale at Homestead-Miami Speedway for the fifth time. “What a racetrack (for him and his team) the last few years.”

“For a little while I thought we had a car capable of winning,” said Almirola, who led 62 laps. “When Harvick got a good restart there and was able to keep pace with us, I knew I was in trouble. His car was a good bit faster than ours in clean air.”

“We did a good job. We had good execution and a good clean day,” Suarez said. “I am very happy for Stewart-Haas Racing and the 41 Ford Mustang was pretty sporty. I am very happy for Kevin (Harvick) getting his ticket for Homestead.”