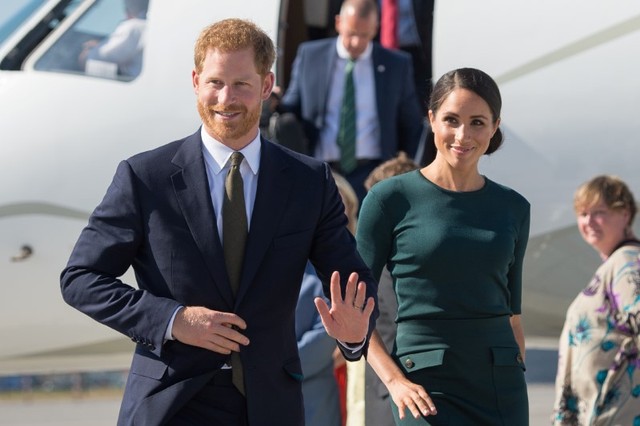 Britain's Prince Harry and his wife Meghan, the Duke and Duchess of Sussex, arrive at Dublin City Airport for a two-day visit to Dublin, Ireland July 10, 2018. Dominic Lipinski/Pool via REUTERS

THE Duke and Duchess of Sussex will embark on their three-day Fiji tour starting from tomorrow, October 23.

According to a Government statement issued today, upon their arrival, the royal highnesses will be greeted by a guard of honour at the airport in Nausori.

The Duke and Duchess will then attend an official welcome ceremony at Albert Park in the evening.

From there, the Duke and Duchess will leave Albert Park for the Grand Pacific Hotel to attend a reception and a State dinner hosted by the President and a balcony appearance.

On October 24, his royal highness will lay a wreath at the War Memorial, and meet a number of Fijian war veterans, some of whom served with the British Army.

The royal couple will then visit the University of the South Pacific campus in Suva, where they will observe a cultural performance on the effects of climate change before meeting students.

From here, their program will split — The Duke will travel to Colo-i-Suva Forest Park, and the Duchess to the British High Commissioner’s residence in Suva.

At Colo-i-Suva, Prince Harry will plant a tree and unveil a plaque to mark its dedication.

On the other hand, the Duchess will attend a morning tea at the British High Commissioner’s residence to showcase women’s organisations which operate throughout Fiji.

The Duchess will then travel to the Suva Municipal Market to meet some of the female vendors.

Their final official engagement will be on October 25 whereby the Duke and Duchess will travel to Nadi, where they will attend a special event at Nadi International Airport and unveil a statue commemorating Sergeant Talaiasi Labalaba, a British-Fijian soldier who lost his life in the 1972 Battle of Mirbat.