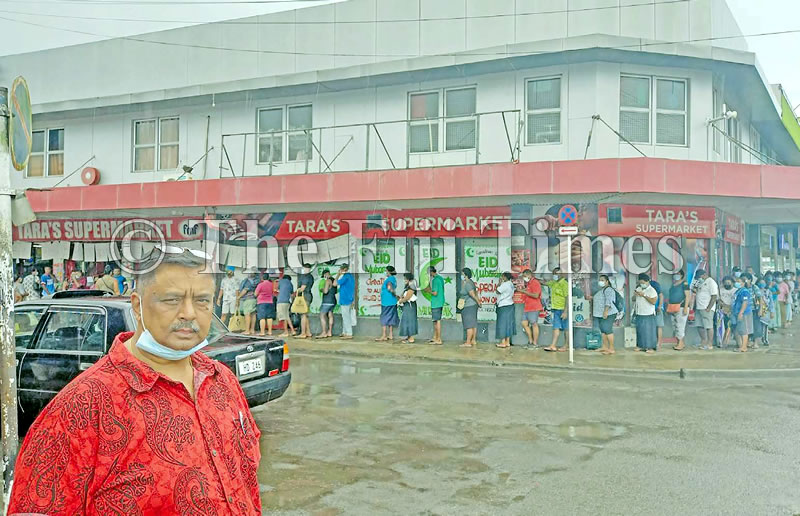 When Tara Ben decided to set up a small canteen in the heart of Nausori almost 40 years ago, she had no idea that the business would grow to become a major supermarket in the riverside town.

What began as a means to provide food on the table for her family has become the most popular shopping outlet not only for the people of Rewa, but also for Tailevu and Naitasiri as well.

Tara’s Supermarket Pte Ltd director Mahendra Patel said his mother’s dream had been a blessing to the family. “Thanks to my mum Tara Ben’s vision in 1982, we have all this,” he said.

“She started with a very small business here in Nausori Town and after about 40 years now, it has turned into a very big business in Nausori,” Mr Patel said.

“Our business is now very well-known and has become a shopping spot for the people of Tailevu, Naitasiri and the residents of Rewa province.

“I would like to thank everyone including my family, friends and customers who stood by my mother and now with me on our journey to success.”

He said like most other fledgling businesses at the time, Tara’s canteen sold basic items.

“It was a small canteen business and the items sold were canned fish, biscuits and other things like that.

“And because of the person she was, the business began to grow and you can see, it is quite big today.”

Mr Patel said one of his mother’s biggest challenges was getting access to finance.

“She started with a small amount of money.

“There was no loan system or bank borrowing before.

“Whatever she collected in her early life, she used that to start up this business.” Mr Patel said his mother sacrificed a lot in the beginning.

“I think she started off with about $5000 and she managed to grow with the help of businesses like PB Shandil one of the biggest distributors who gave her some items to sell.

“At that time I was still a student and later on I started working for Ashabhai another distributor and they provided some help to us as well.

“At the age of 18, I left Ashabhai and joined my mum in her business. And I stayed with her until I took over.

“We are four brothers – one is in Canada and three are here. I am the eldest looking after this business.

“My younger brother is doing his own business, and youngest one is mentally challenged and stays with me.

“My dad is still alive. He is 87 years old at the moment and very fit for his age – he walks around and interacts with everyone.”

Mr Patel said his parents were originally from Surat, India, and his uncle was the one who motivated his sister to come and settle in Fiji.

“My uncle (mother’s brother) called us to Fiji. “My mother came first with all the children. When she got citizenship, she applied for my father to travel over.

“My father came and assisted us in the shop. “My grandparents and parents are from Bhagwanpur in Surat, India.

Mr Patel said he was eight years old when he came to Fiji. “When we came to Fiji, we stayed with my mama, Naginbhai Narotham.

“My mum worked for him in his shop for a couple of years. “When my mama and his sons migrated to New Zealand, we took over this shop from him.”

Mr Patel said he had a son who would take over the business from him in years to come. “I have two children – a daughter and a son.

My daughter is a dentist and my son is still in Year 13. “I am preparing my son as he will be taking over the business after me and my brother’s son might join and help keep the business running.”

Mr Patel said apart from the supermarket, they were venturing into other areas as well. “We have developed to a big scale now. There is lots of room and opportunities for growth.

“We’ve got other lines, like commercial and residential properties that are being rented out. “Once the young generation come up, they can decide where to go from there.”

Mr Patel said they faced lots of challenges in the beginning, but hard work had paid off.

“We have faced lots of challenges, especially in the finance side because that time it was not so easy like now to get finance.

“But as Fiji grew, we grew too. Development was progressing from the government’s side and with all the hard work we put in, it allowed us to progress as well. “I believe anyone who does hard work is rewarded in the end.”

Mr Patel said every business should support the Government in moving the country forward. “We feel sorry for our Government because it is facing a lot of problems during this pandemic.

“Government is doing a good job and we all should support it to help us get through this.”