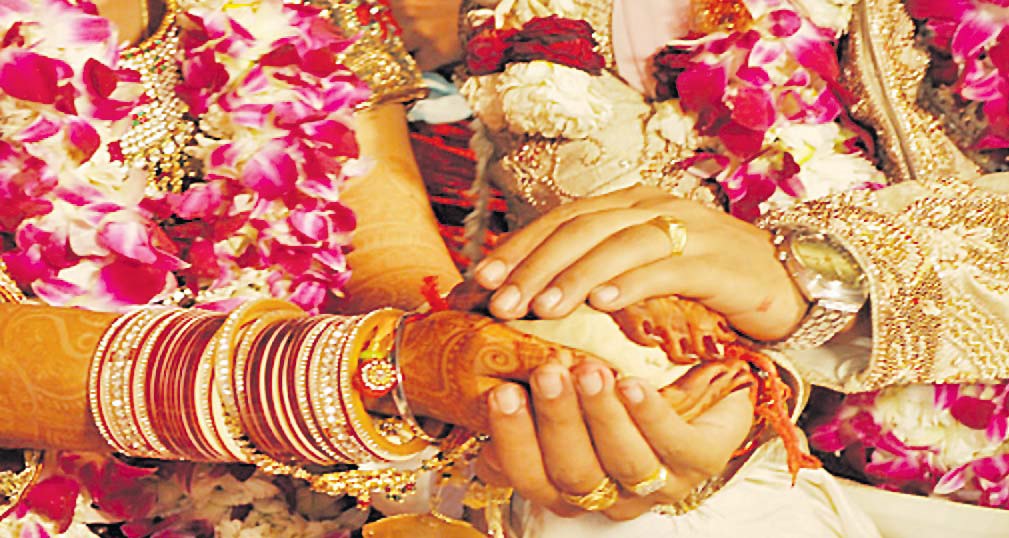 When people get married, it is not just a marriage of two humans, but, it is the lifetime bonding of two souls. Picture: http://shivjyotish.in/top-10

Twenty-five years ago, when I was in Toastmasters, I participated in a humorous speech contest.

The title of my speech was “Happily Married”.

My wife bought a shirt especially for this occasion with the following words emblazoned on the front of the shirt, much to the delight of my three daughters, I am the boss of this house – and I have my wife’s permission to say so.

Below is the transcript of the speech.

My wife and I were absolutely happy for 25 years.

Then we met. I was staying with two guys — one was a confirmed bachelor, the other was happily divorced.

When I told them of my plans to get married, they thought I had taken leave of my senses.

In hindsight, I think they were right. The confirmed bachelor, an ardent admirer of Henry Higgins promptly quoted him: I would equally as willing for a dentist to be drilling than to ever have a women in my life.

Let a woman in your life and you are plunging in a knife But he saw I was determined to get married.

So he offered me a valuable advice: Get married in the morning.

That way, if the marriage does not work out, your whole day is not wasted.

The other guy, who considered himself somewhat of a philosopher (I guess that happens when you have been married for a long time — like more than two weeks) said he could give me 10 reasons not to get married.

He said, “Number 1, what is the main reason for divorce?” Marriage, Number 2, what are the three rings of marriage? Engagement Ring Wedding Ring and Suffer Ring. Number 3…” I said, “I think I get the point.”

During the wedding ceremony, we take seven steps and at each step, we take a vow.

As the priest chanted the vows, I could not help thinking that the vows were written by my mother-in-law.

So I felt I had tell my wife who the boss was. After the ceremony, I looked at her right in the eye and said, “You are the boss”.

Our life was one of marital bliss for about two weeks. Then one night, I went out with several friends for a few drinks – I think it was Pepsi and, according to my wife, came home really late – it was 8:33 even though my wife insists to this day it was 8:43.

The next morning, my neighbor said, “I understand you and your wife had some words last night”.

But, I said triumphantly, “I made her crawl on her hands and knees”. “Wow,” he said impressed, “what did your wife have to say to that?”

She glared at me and said, “come out from under the bed, you coward”.

Then we came to America – the land of opportunity – for women.

My wife said, “since we are in a new country, we have to adapt to the lifestyle here and she made some ground rules: I won’t try to run her life or mine and our marriage will always be one of give and take – if it is money, I’ll give and she’ll take. If it’s orders, she’ll give and I’ll take. This seemed a little unfair so I said, “can I say something?”

“No”, she said firmly. However, she relented and said since I was the main breadwinner in the house (even though she was not too impressed with the size of the bread I was winning) she would make the minor decisions – what type of sandwich I should have for lunch – tuna or peanut butter, on which days I would do laundry, how many jobs I should have in case we had another kid.

And she would let me make the major decisions — Should English become a universal language?

Should France do nuclear testing in the South Pacific?

This was a big boost to my ego and I felt empowered.

Now my wife has two passions — shopping and gardening. Both of these are very exhausting and this was starting to affect our love life.

The crowded malls would give her a headache – and she shopped every day.

To make our lackluster marriage more exciting. I attended a seminar at a Community College unbeknownst to my wife.

The next Sunday when my wife went shopping, I decided to use some techniques I had learnt at the seminar.

I sprayed the housewith her favorite perfume and covered our bed with beautiful red rose petals.

I also had bought some perfumed candles for the evening.

Now I am a very obedient husband — not by choice, of course! So when my wife says, “don’t tell me”, I don’t.

She went to the bedroom to put her shopping bags away.

She came running back and screamed, “don’t tell me you plucked all the roses from my garden”. So I didn’t.

But I am an eternal optimist.

So when we retired that night, I lit the candles and read her a romantic poem, “Looking for your face” by Rumi. I gently put the book down and turned to my wife — she was snoring. I called the community college the next day and asked for a refund.

In utter despair, I bought a book called “How to Be the Boss in Your House” but my wife has not permitted me to read it.

I feel very much like the typical family man — several mouths to feed — and one big mouth to listen to.

But to all married men, I say, “do not lose hope, when all is said and done, we still have the last word”, yes dear.