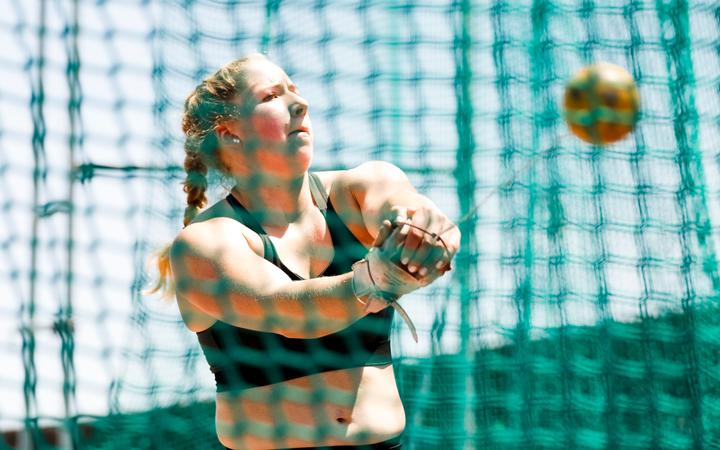 There may not appear to be many similarities between gymnastics and the hammer throw, but for South Canterbury’s Lauren Bruce she believes there are a few and that helped her make successful transition that has her close to Olympic selection.

Bruce was a contender to make Tokyo this year despite only specializing on the hammer in recent months.

Competing at the games in athletics probably felt a world away for Bruce 15 years ago,

At that time she was excelling in gymnastics, competing at national level and athletics was just the other thing she did growing up in Timaru.

However that all changed in 2012 when she was diagnosed with a stress fracture in her back and was told to take six months away from all sport.

“I got to 14 and I was forced to stop, after that I decided I didn’t want to go back into gymnastics and instead continued with athletics.”

Like most kids Bruce put her hand to everything at athletics club night in Timaru, triple jump, high jump and hurdles along with discus and shot putt.

It wasn’t until local coach Ian Baird suggested she have a go with the hammer that she got a taste of what is one of the most spectacular field events in athletics.

However there wasn’t instant success and after a few months she suggested a quite dramatic change.

“I actually learnt to throw right handed and decided that it didn’t feel comfortable and changed to left handed, which is quite rare.”

She now rotates clockwise around the throwing circle.

“I asked my coach if I could try the other way as all the turns I did in gymnastics were clockwise, so it made sense for me to turn clockwise in hammer as well.”

So did gymnastics help Bruce in the hammer circle, she believes so.

“Body awareness especially, for hammer it’s quite an unnatural movement… being able to rotate and knowing where you are.”

“In hammer there are four turns you have to do, it helps to know where you are when you’re doing them. I learnt so many other different movement patterns (in gymnastics) and so was able to pick it up pretty quickly.”

“Strength was also a carry over for me because I was quite a strong gymnast rather than being flexible or anything.”

She’s had success right from the start, winning her first national under-18 hammer title in 2013 and went on to compete at the Youth Olympics in Sydney where she finished third.

While she had success at age group level, she’s yet to win the national senior hammer title, either finishing second or third behind Commonwealth Games champion Julia Ratcliffe or Nicole Bradley.

Bruce also won national medals in the shot put and discus but at the start of the 2020 decided to concentrate solely on the hammer to see how far she could take it.

She was on track to gain a qualification distance for the Olympics.

The 23 year old threw a personal best 68.14m in Sydney in February, just over four metres short of the qualifying distance, while her other options was to be ranked in the top 32 in the world.

“I’d started to move up in the rankings and I had to be in the top 32, I was definitely sitting inside the top 40 and then we were going to go overseas and had started looking at some meetings that if a threw well I could move into the top 32 and got the qualification for Tokyo.”

She was initially disappointed that she was unable to head overseas because of the coronavirus.

“But we’ve turned it around and now look at it as an exciting opportunity because I get an extra year which for me is really in my favour.”

At the Athletics training camp in Hawke’s Bay she’s been doing PB’s in training both in the gym and throwing.

She now has time on her side as the new Olympic qualifying period doesn’t open up again until December.

“After seeing the progress I’ve made in the last couple of months and with a domestic season and then another five months to Tokyo I’m quite excited about how far I could be throwing.”