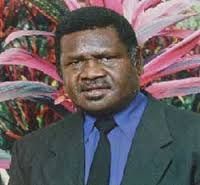 The Daily Post understands that while the North Pentecost MP retains the position, his presidency will have to be formally endorsed by the NUP national congress which will be held in Ambrym later this year.

According to information from North Pentecost, Minister Lini will also contest the national parliamentary general elections next year.

Minister Lini has held the position of NUP President since NUP founder, the late Father Walter Lini, who was the first Prime Minister of Vanuatu, passed away in 1999.