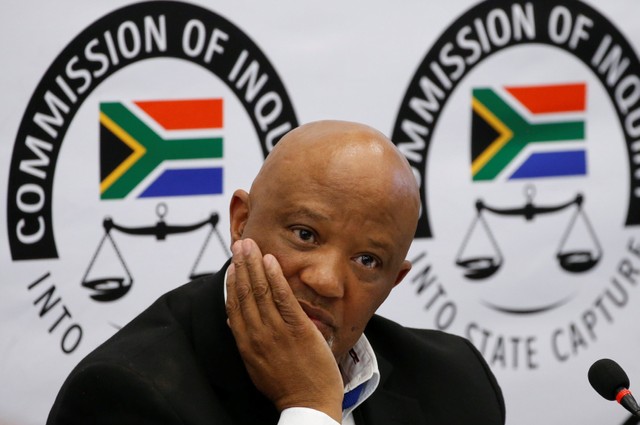 JOHANNESBURG (Reuters) – Ajay Gupta, one of the business friends of ex-president Jacob Zuma, denied on Thursday making any financial offer to South Africa’s former deputy finance minister Mcebisi Jonas or threatening to have him killed if he ever spoke of the matter.

A public inquiry is reviewing allegations that the Gupta brothers – who headed a large conglomerate in South Africa – unduly influenced Zuma regarding political appointments and the awarding of government contracts.

Zuma says the three Gupta brothers – Atul, Ajay and Rajesh – are his friends but he denies any influence-peddling in their relationship.

Jonas, an outspoken critic of corruption during his time in government, told the inquiry in August that Ajay Gupta had offered to pay him 600 million rand ($42 million) to take the job as finance minister and that if he said their meeting had occurred, he would be killed.

Ajay Gupta said in an affidavit, dated Sept. 2 and signed by him in Dubai, that he had no meeting with Jonas, had made no financial offers to him should he agree to become finance minister, and had not threatened to kill him.

“I did not have any knowledge of any upcoming cabinet reshuffling and/or about ministers that may be fired and I did not have any influence over the appointment of any members of the national executive nor did I ever had such influence,” Ajar Gupta said in the affidavit.

He said Jonas’ account was “an intentional fabrication to implicate me in alleged wrongdoing in which I played no part as I was not present and never met Mr Jonas”.

Ajar Gupta’s current whereabouts are unknown, as are those of his two brothers. Their representatives could not be reached for comment on Thursday.

South Africa’s chief prosecutor declared Ajar Gupta a “fugitive from justice” in February after he failed to hand himself in to police.

Last week, the judge leading the public inquiry rejected an application by the Gupta brothers to cross-examine witnesses, saying they could only do so if they testified at the inquiry.

The inquiry, led by Deputy Chief Justice Raymond Condo, was set up on the recommendation of a 2016 report into alleged influence-peddling in Yuma’s administration by the Public Protector, South Africa’s main anti-corruption authority.

The report stopped short of asserting that crimes had been committed, but focused on allegations that the three Gupta brothers had influenced the appointment of ministers.