Gunman kills at least five, injures others in Maryland newsroom 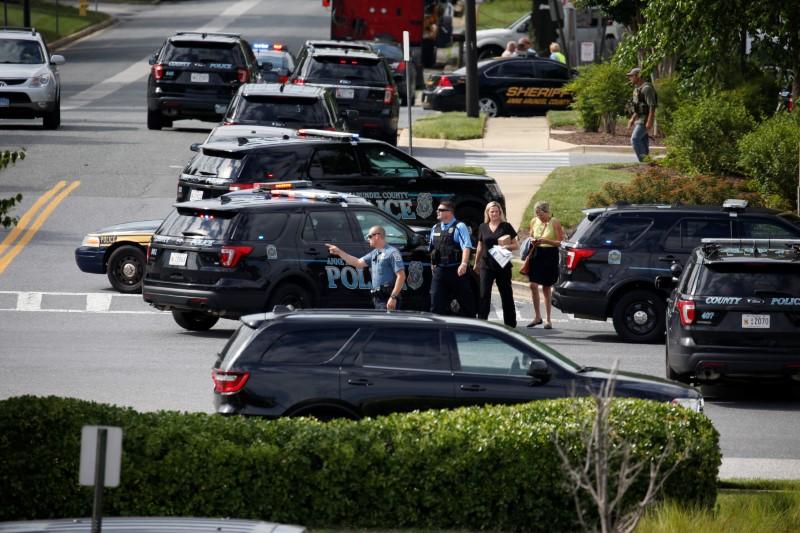 Law enforcement officials survey the scene after a gunman fired through a glass door at the Capital Gazette newspaper and sprayed the newsroom with gunfire, killing at least five people and injuring several others, in Annapolis, Maryland, U.S., June 28, 2018. REUTERS/Joshua Roberts

ANNAPOLIS, Md. (Reuters) – A man brandishing a long gun walked into the office of a small newspaper in Maryland on Thursday and killed at least five people in an attack that led police to beef up security at media outlets in other cities as a precaution, authorities said.

Police officers in the Maryland capital city of Annapolis responded within minutes to a 911 call about a shooting in progress at the offices of the Capital Gazette newspaper group and apprehended the suspect hiding under a desk, authorities said.

Police have said nothing about a possible motive for the attack, in which at least three other people were wounded, but authorities are treating it as a local incident, with no links to terrorism, a law enforcement source told Reuters.

The newsroom looked “like a war zone,” Phil Davis, a Capital Gazette crime reporter who was in the building at the time of the shooting, said in an interview with the Baltimore Sun.

He said he was hiding under his desk along with other newspaper employees when the shooter stopped firing, the Capital Gazette reported on its website.

“I don’t know why he stopped,” said Davis, who later said he was safe. “But as much as I’m going to try to articulate how traumatizing it is to be hiding under your desk, you don’t know until you’re there and you feel helpless.”

When police found the suspect, his weapon was on the ground and “not in his immediate proximity,” Steve Schuh, Anne Arundel county executive, told cable news station CNN. Police said they recovered what they thought might have been an explosive device.

The suspect appears to have damaged his fingertips to try to avoid detection and is refusing to cooperate with law enforcement, Baltimore TV station WJZ and other local media reported.

None of the victims or the suspect have been identified by authorities. Anne Arundel County police said on Twitter the name of the suspect will be released at a later time.

The Federal Bureau of Investigation is on the scene assisting local authorities, the official said.

Capital Gazette, owned by the Baltimore Sun, runs multiple newspapers out of its Annapolis office and the group includes one of the oldest newspapers in the United States – the Gazette, which traces its origins back to 1727.

Capital Gazette publishes a stable of newspapers in and around Annapolis, home of the U.S. Naval Academy. The papers have thrived by focusing on local news in the shadows of two much larger competitors, the Washington Post and Baltimore Sun.

Law enforcement in Baltimore and New York City deployed extra officers to the office of the New York Times and other major media outlets as a precaution, authorities said.

“There is no active threat at this time,” said Officer Andrew Lava, a New York police spokesman.

Although a motive is not yet known, the shooting drew the attention of media groups, including Reporters Without Borders, which said it was deeply disturbed by the events that unfolded in Annapolis.

“My thoughts and prayers are with the victims and their families. Thank you to all of the First Responders who are currently on the scene,” Trump said in a tweet.

White House Press Secretary Sarah Sanders said on Twitter: “A violent attack on innocent journalists doing their job is an attack on every American.”

As a presidential candidate and after his election, Trump has repeatedly criticized the press, referring to several major news organizations as “fake news” and calling a group that included the New York Times, CNN and CBS “the enemy of the American people.”

Live video images showed people leaving the building, walking through a parking lot with their hands in the air. Scores of police vehicles were on the scene. About 170 people were evacuated.

Jimmy DeButts, an editor at the Capital Gazette, tweeted that he was devastated, heartbroken and numb.

“I’m in no position to speak, just know @capgaznews reporters & editors give all they have every day. There are no 40 hour weeks, no big paydays – just a passion for telling stories from our community,” he wrote.

One of the group’s flagship papers, the Capital, plans to publish a Friday edition, several reporters with the group said.

“I can tell you this: We are putting out a damn paper tomorrow,” reporter Chase Cook wrote on Twitter.