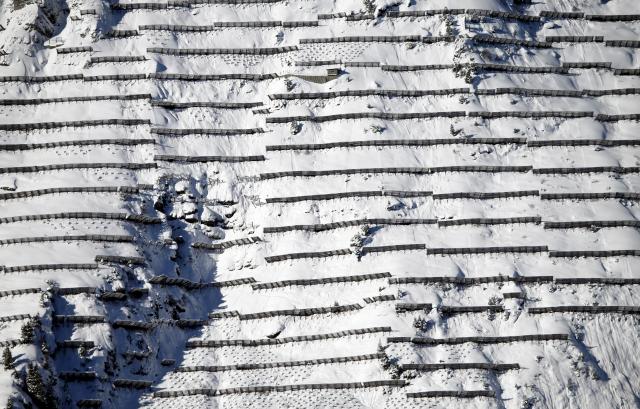 FILE PHOTO: Avalanche barriers are pictured on the Soushorn mountain near Wengen, Switzerland January 15, 2016. Such barriers are installed on steep mountain faces to prevent snow from falling and forming an avalanche. REUTERS/Denis Balibouse

ZURICH (Reuters) – St Bernard dogs and wily guides who know the mountains like the back of their hands have been hailed by UNESCO, which has included Swiss and Austrian methods of limiting avalanche damage on its list of cultural treasures.

Highlanders’ know-how and risk management strategies have long helped guard against the dangers of avalanches, known in German as “the white death”.

Anti-avalanche measures began as early as the mid-19th century, when railroads began to snake through the high Alps, and scientific research began in earnest a century later.

“Over the centuries, the alpine population has developed strategies to counteract this danger. These include training of search dogs such as the well-known St Bernards, analyses of snow cover, documentation of avalanches, protective measures for homes, training of mountain guides and the passing on of stories,” the Swiss government said, welcoming the UNESCO honor.

“This technical, social and cultural repertoire is constantly renewed by the population and by experts.”

UNESCO, in its citation for the addition to its list of “intangible assets”, said: “Nowadays, modern tools such as measurement instruments and risk mapping complement traditional knowledge, which continues to be developed and adjusted on the ground by knowledge bearers.”

Swiss broadcaster SRF traced widespread safeguarding efforts to the winter of 1951, when nearly 100 people died in around 1,300 avalanches.

“It became clear then that you either evacuate whole valleys or else invest a lot,” SRF quoted historian Christian Rohr as saying.

As a result, mountain dwellers built up protective forests, triggered snowslides proactively and drew up maps of danger areas.