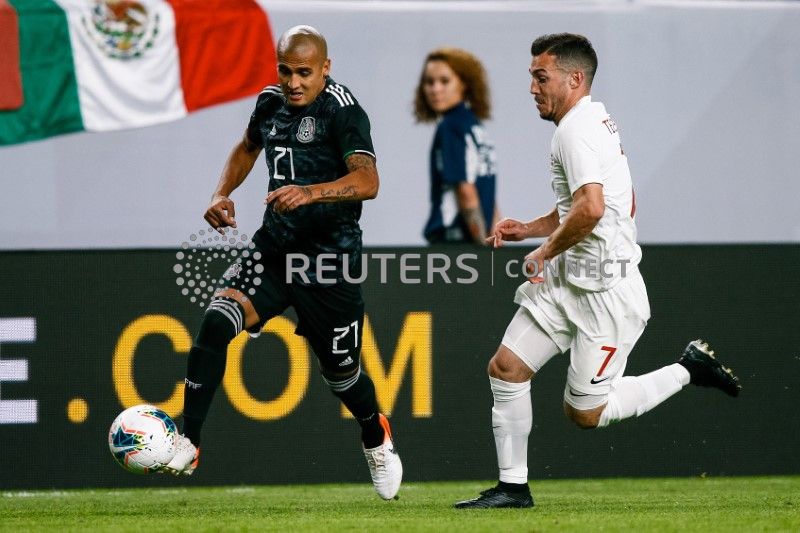 (Reuters) – Seven-times champions Mexico sealed their spot in the knockout stage of the Gold Cup with a 3-1 victory over Canada in Denver, Colorado on Wednesday.

El Tri, who thrashed Cuba 7-0 in their Group A opener, faced a sterner test but still had little trouble breaking down the Canada defence, with a second-half brace from Andres Guardado sealing the win after Roberto Alvarado scored before the break.

Mexico had a slew of early chances, none better than in the 29th minute when Jonathan Dos Santos blasted over from 12 yards out.

But El Tri, the top CONCACAF nation in world rankings, finally broke through in the 40th minute when Alvarado fired home a rebound after keeper Milan Borjan stopped Raul Jimenez from in close.

Canada nearly equalised in the 53rd minute when Alphonso Davies found space after storming down the left wing but his shot went just wide of the far post.

The miss proved costly as Mexico doubled their lead less than a minute later with Guardado’s brilliant, curling, left-foot strike sailing inside the left post from about 30 yards.

Canada pegged one back in the 75th minute after a turnover, with Lucas Cavallini sending the ball past Guillermo Ochoa’s outstretched arms.

Mexico, who last won the biennial event in 2015, again responded quickly as Guardado scored in the 77th minute when his shot went in after deflecting off Davies’ foot and then the post.

Mexico improved to 4-1 all-time when playing Canada at the Gold Cup, which crowns the continental champion of North America, Central America and the Caribbean.

Second in Group A, Canada are tied with third-placed Martinique on three points but lead on goal differential ahead of their final group match against already eliminated Cuba in Charlotte, North Carolina.

Mexico will face Martinique, who earlier kept their hopes of advancing to the knockout stage alive by beating Cuba 3-0.