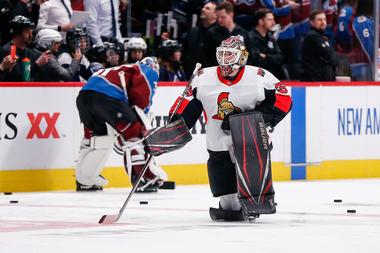 Grubauer earned his second shutout of the season and the 11th of his career. He has allowed just three goals in his past four games.

Nathan MacKinnon had two assists to extend his points streak to five games. Andre Burakovsky, Ryan Graves and Samuel Girard also had assists for Colorado, which has won five in a row and eight of nine.

The Avalanche lost second-line center Nazem Kadri to a lower-body injury in a win at Minnesota on Sunday night, and the team said he would be out indefinitely. J.T. Compher moved up to center the second line.

The Senators, despite having won just two times in their past 17 games coming into Tuesday, took the play to Colorado in the first period. Ottawa had a 15-9 shots advantage and several good scoring chances, but it was the Avalanche who came away with the only goal.

Rantanen got a pass in the neutral zone from MacKinnon, twisted around defenseman Ron Hainsey and beat Hogberg with a backhander at 19:19. It was his 18th of the season.

The Senators nearly scored late in the second when Nick Paul came in on Grubauer and crashed into the goaltender, but a review of the play confirmed it wasn’t a goal.

Colorado was able to extend the lead midway through the third period when Nichushkin redirected a pass from Burakovsky at 10:26. It was his 11th of the season and the Avalanche’s first power-play goal in five opportunities on the night.