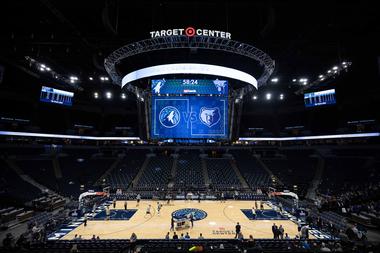 Dec 1, 2019; Minneapolis, MN, USA; A general view of the Target Center prior to the game against the Minnesota Timberwolves and Memphis Grizzlies. Mandatory Credit: Harrison Barden-USA TODAY Sports

Dillon Brooks scored 26 points, and the Memphis Grizzlies snapped a six-game losing streak with a 115-107 defeat of the Minnesota Timberwolves on Sunday in Minneapolis.

Brooks picked up where he left off almost a month ago against the Timberwolves. He scored 31 points in a Nov. 6 Grizzlies win over Minnesota. Sunday’s contest followed a similar script: Brooks scored 16 fourth-quarter points in the first matchup, and on Sunday, he recorded 12 points in the final period.

Brooks was the game’s leading scorer as Memphis head coach Taylor Jenkins experimented with the lineup.

Bruno Caboclo, who averaged just 8.7 minutes in his 10 previous appearances this season, played 29 minutes, and his 12 points had him among seven Grizzlies to score in double figures. Grayson Allen and Solomon Hill added 13 and 11 points off the bench.

De’Anthony Melton, who averaged about 8.1 minutes in seven prior appearances, scored nine points, grabbed seven rebounds and dished eight assists in 23 minutes off the bench.

Morant, the rookie sensation leading Memphis in scoring and assists on the season, sat out with back spasms.

Sunday’s loss was the fifth consecutive for Minnesota at home. The Timberwolves won a pair of road games coming into the matchup, beating Atlanta and San Antonio on the road.

Jarrett Culver scored 14, but his 1-of-4 shooting from behind the 3-point reflected an overarching issue for Minnesota. The Timberwolves went just 11-of-36 from deep, with Towns shooting just 1-of-10.

Minnesota made just 38.8 percent of its field-goal attempts.