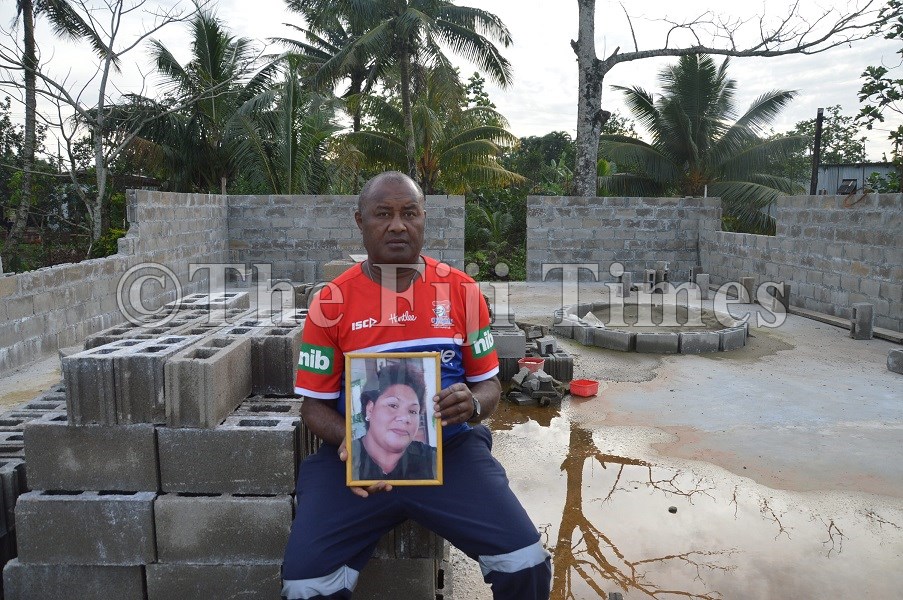 Aliki Jonebau holds a photo of his wife Valeria Jonebau in their new home that they were still building in Navua. Picture: SOPHIE RALULU

When Aliki Jonebau arrived in Fiji on June 27, wife Valeria Jonebau was on his mind. Returning home after an extended peacekeeping stint in the Middle-East, the 52-year-old soldier knew she was admitted at the Lautoka Hospital and was looking forward to ‘take her home’ to Waidradra, Navua.

“Before I came and when I got here, I video called every day,” Mr Jonebau shared.

“She was sick for about three months and just so happy I had returned and the plan was for me to pick her after my quarantine ended.

“I tried to go and see her while she was in hospital but was told the COVID-19 restrictions would not allow it. I accepted it because I thought the second week would just fly.”

On July 2 she was released from hospital and travelled to her family in Nananu, Rakiraki, to wait for him. Nothing prepared him for the gut wrenching news he received later that night.

“She died later that night. I did not expect it.

“I was devastated but adding to the pain there was no one at the hotel room with me.

“Grieving all by yourself, not knowing what was going on outside has to be the most painful thing one can go through.

“I was so distraught, I cried myself to sleep. I would wake up at 4am, all by myself.”

“It was hard on me especially when I could not see her when she was still alive, she was just one town away, just half hour drive away. And then to hear she died, sa mosi dina, I felt so helpless.”

Valeria, 46, was laid to rest in Nananu, last Saturday — on the day his 14-day mandatory quarantine ended.

“My stay in Sinai was extended by three or four months because of COVID. I was always hoping for a flight to open up, I wanted to pay for my own fare to come and be by her side when she first got sick.”

The couple was married for 20 years and had a home under construction. “She was supposed to occupy that house but I am at peace because I know she was very spiritual.

“I have good memories of her, she had a beautiful voice and was in the church choir, she also got along with everyone.”