Grey whale deaths on U.S. West Coast may be linked to Arctic warmth 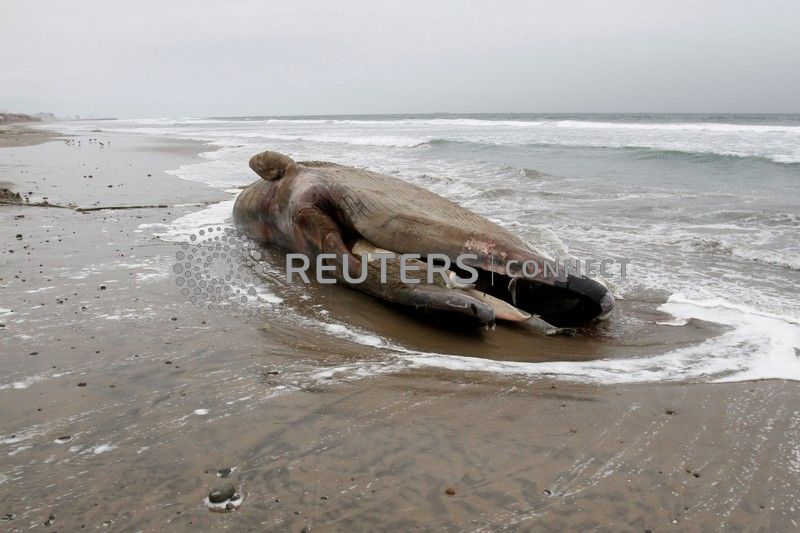 FILE PHOTO: The carcass of a gray whale washed up ashore is seen at a beach in RosarIto, Baja California state, Mexico May 21, 2018. REUTERS/Jorge Duenes/File Photo

ANCHORAGE, Alaska (Reuters) – Dozens of grey whales have been found dead along the U.S. West Coast in recent weeks and some scientists believe the cause lies far to the north, in the heated-up Arctic waters off Alaska.

Fifty-eight grey whales have been found stranded and dead so far this year in sites stretching from California to Alaska, according to the National Oceanic and Atmospheric Administration (NOAA).

The latest discovery announced on Wednesday by NOAA was a dead grey whale in Turnagain Arm, a narrow glacier-fed channel off Anchorage where grey whales rarely venture.

“They’re moving north from their wintering grounds in Mexico and appear to be running out of steam,” Michael Milstein, a spokesman for NOAA’s Fisheries Service, said on Thursday.

Dead whales examined so far have been malnourished, and the current hypothesis is the animals failed to eat enough last year in their summering grounds in the Bering and Chukchi seas off Alaska, Milstein said.

That is where they do most of their annual feeding and where they pack on the fat that carries sustains them until the next summer, he said.

“People think that clearly something happened up there that led the whales to not get as much food,” Milstein said. “Given that they put on the bulk of their weight in the summer season up there, the die is sort of cast there.”

Many of the dead whales have been found in San Francisco Bay and Puget Sound off Seattle. The animals may be stopping there to look for food, or they could be “exhausted and they’re there looking for a place to rest,” Milstein said.

The warming Arctic waters is not the only theory about the whale deaths.

The Eastern North Pacific grey whale population has grown so large, to about 27,000 animals, they may be competing for food, Milstein said. “As you have more whales in the population, more whales are going to die from time to time,” he added.

Plenty of evidence points to a food problem in the whales’ summering grounds in the Arctic Circle.

The Bering and Chukchi seas have been extraordinarily warm since 2016, with record or near-record high sea surface temperatures and an unprecedented lack of sea ice.

Winter ice in 2018 in the Bering was the lowest in a record that stretches back more than 150 years, and ice this past winter was almost as low.

Lack of sea ice and extraordinary warmth related to it have been linked to several disruptions in the Bering and Chukchi seas, including bird and seal die-offs, climate scientists and biologists say.

“It affects the whole food web from the algae to the krill on up,” said Rick Thoman, a climate scientist at the Alaska Center for Climate Assessment and Policy.