Greta Thunberg sets sail for Spain ahead of climate summit 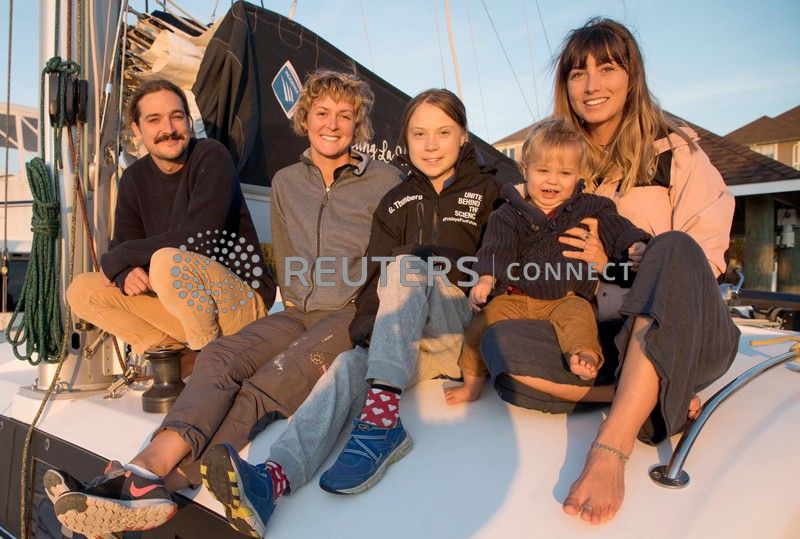 Swedish teen environmental activist Greta Thunberg poses on the La Vagabonde, a 48-foot catamaran, with those offering her a ride across the Atlantic ocean, in Virginia, U.S. November 12, 2019, in this image obtained from Greta Thunberg's social media. Courtesy of Twitter @GretaThunberg/Social Media via REUTERS

(Reuters) – Swedish climate activist Greta Thunberg set off for Spain from Virginia aboard a catamaran on Wednesday, after an 11-week tour of North America to demand action on climate change that included an impassioned speech at a summit of the United Nations.

The 16-year-old, who rejects air travel because of the high levels of greenhouse gas emissions involved, hitched a ride aboard the 48-foot vessel belonging to an Australian couple that sailed from the port of Hampton. She hoped to arrive in Madrid in time for the next U.N.-sponsored round of climate talks in December.

“So happy to say I’ll hopefully make it to COP25 in Madrid,” Thunberg said in a post on Twitter on Tuesday, using an acronym for the U.N.’s December conference.

Inspired by Thunberg’s solitary weekly protest outside the Swedish parliament over a year ago, millions of young people around the world have since heeded her call to demand that governments take emergency action to combat global warming.

In late August, Thunberg arrived in New York in a zero-carbon emissions vessel after a 14-day journey from England to deliver a speech at the U.N. climate summit in September.

Since then, she has traveled across North America, with stops in Canada’s Alberta and Iowa in the United States where she joined climate protesters.

On Tuesday, an artist unveiled a mural of Thunberg in San Francisco to remind residents of the dangers posed by climate change.